Building our Economic Engine: Our Vision for the Economy 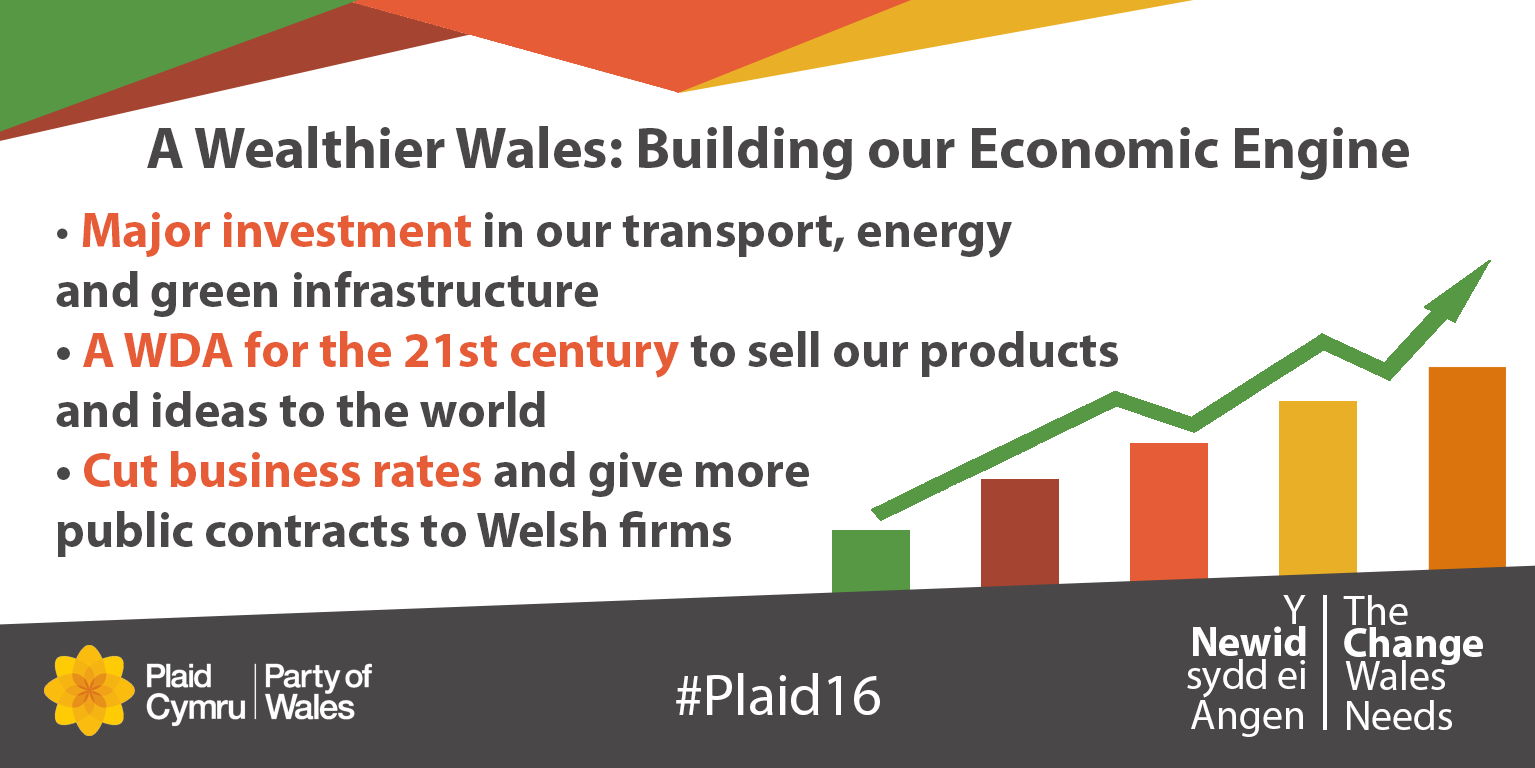 Such is the developmental gap between Wales and most other advanced economies currently it is not possible to avoid conventional economic growth as a central element in a strategy of catch-up. This is necessary if we as a society are to achieve the level of public service or prosperity that we see in other small countries, like Denmark or even post-crisis Iceland. Our medium-term economic aim, therefore, is to close the 30% income gap that has opened up between Wales and the rest of the UK – while remaining fully committed to doing so in a way that is sustainable, resilient and socially and inter-generationally just.

Returning the Welsh economy to the position it occupied throughout the 1970s and 1980s – at around 85% of UK income per capita – we believe to be achievable with the intelligent use of all the policy levers at the Welsh Government’s disposal, including, where relevant, partnership working with the UK and EU. However, the full achievement of parity at an accelerating rate will require the acquisition of further economic powers.

We will therefore initiate emergency talks with the UK Government to address the chronic and deep-rooted divide in economic prosperity between Wales and the rest of the UK. We will seek agreement on the establishment of an Independent Commission on Economic Equalisation. This Commission’s terms of reference will include consideration of the powers and resources needed to close the income gap within a generation including the terms of a new confederal settlement for Wales together with the creation of a twenty-year plan for reinvestment and recovery – a modern Marshall Plan for the Welsh Economy.

Our medium-term economic objective is to bring Wales to economic parity with the UK within a generation – that is over a twenty year period to 2036. This means achieving a Welsh GVA growth rate of around 3.5% every year, equating to an additional £1.5 billion in output for the Welsh economy every year. This is challenging but by no means impossible. The Basque Country achieved an average GVA growth rate of 3.69% between 1995 and 2008.

We will set out and implement a comprehensive National Economic Plan to achieve our parity goal. The plan will consist of three dimensions: raising skill levels, an active industrial strategy and a comprehensive plan for infrastructure investment. 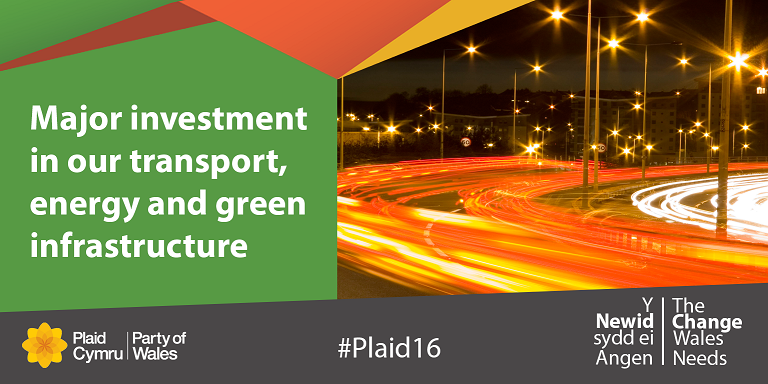 1. Major investment in our transport, energy and green infrastructure

We are embarking upon the largest programme of reconstruction our nation has seen since the start of devolution. We will establish a new body, National Infrastructure Commission Wales (NICW), an independent public corporation that will plan, fund and deliver the aspirations set out in the National Infrastructure Investment Plan to modernise our nation’s transport, telecommunications, energy and green infrastructure. This investment in our nation will modernise our infrastructure, create and safeguard jobs, and help secure Wales’ economic future.

For businesses to invest and grow in Wales, they first need access to the necessary infrastructure that will support that growth; this requires substantial investment in transport, telecommunications and energy infrastructure. Not only will our plans create thousands of jobs within the construction, engineering and various other sectors involved in the construction of infrastructure projects, we will seek to maximise the use of Welsh domiciled companies, industries and produce such as Welsh steel, creating new economic opportunities for local businesses and domestic supply chains.

The lack of planning in shovel-ready projects from Labour means that the ‘Rebuild Wales’ programme will have to be implemented over a decade. Within the first 100 days of a Plaid Cymru government, we will bring forward proposals to establish a National Infrastructure Commission for Wales with the aim of beginning to implement our Rebuild Wales plan by the end of 2016, investing in the transport, social and green infrastructure of our Nation. This is a long-term economic strategy that will continue to invest in our nation’s infrastructure and sustain economic growth for generations to come.

In developing our investment plan we will take a bold and yet prudent approach. We will seek to raise £15 billion from a range of sources over the ten year course of a two-term Plaid Cymru led administration, enabling us to double the current capital investment totals of the Welsh Government. 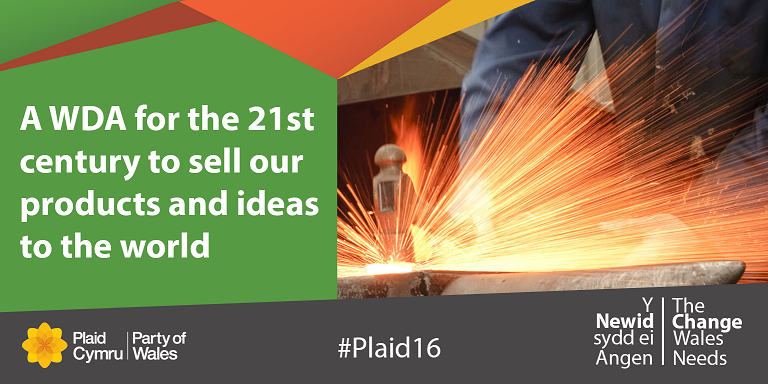 2. A WDA for the 21st century to sell our products and ideas to the world

We will create a WDA for the 21st Century: a Wales Development Agency which will sell Wales - our products and ideas - to the world. This will be a new trade and investment promotion agency for Wales structured as a public-private partnership, with strong representation from business on its board, autonomous from the Civil Service but answerable to the Welsh Government and to business through their membership organisations.

It will use the restored WDA brand – as the Wales Development Agency - to work globally and throughout the UK, to attract new businesses to Wales, to boost Welsh global and intra-UK exports, and at home, work through a combination of internal specialists and external experts, to develop Welsh industry clusters and supply chains.

To this day, the WDA remains a recognised global brand, both around the UK and the wider world. Since the abolition of the WDA in 2006, there have been significant changes to the public sector support structures in Wales which were established to support and promote Welsh exports and attract foreign investment to Wales, which has led to confusion and a lack of cohesion. As a result, Wales’ exports have dropped by £1.6bn under the current Labour government.

The creation of this new arm’s length body can help with the delivery of our economic plan at home and re-establish Wales as a recognisable, desirable centre for investment on the world stage. It will have the freedom to think innovatively about how to build Welsh business links with the world; boosting exports and attracting sustainable inward investment that will see our nation’s economy prosper. 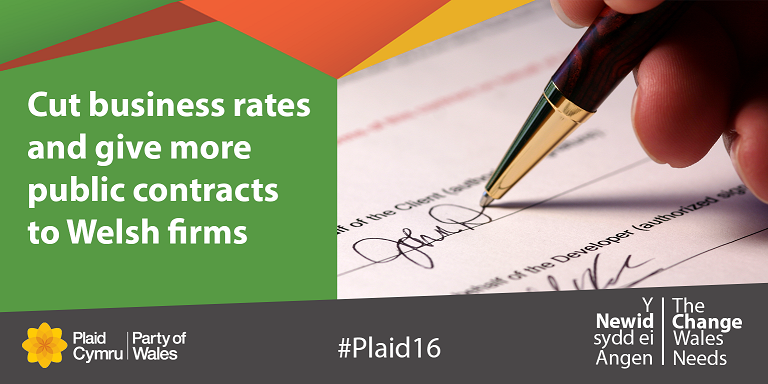 On business rates, we will increase business rate relief so that any firm with a rateable value of less than £10,000 per year will pay no business rates, and we will introduce a tapered relief for firms with a rateable value between £10,000 and £15,000. 83,000 businesses will benefit from this policy and over 70,000 would end up having to pay no rates at all. In order to encourage new start-ups, we will not charge any business rates due for the first year of operation. We will also offer targeted business rate reliefs for larger companies that agree to meet certain criteria on corporate social responsibility – including opportunities for local suppliers, the Welsh Living Wage, the minimisation of waste and the use of renewable energy.

SME’s are the backbone of the Welsh economy and supporting our small business and helping them grow is crucial to the overall prosperity of the economy. In its current form, business rates act as a tax that is unresponsive to wider economic trends, and can act as a disincentive to smaller businesses who want to invest and expand.

On procurement, the Welsh public sector in Wales spends £5.5 billion per annum through procurement for the delivery of works, supply and services contracts. However, Wales based suppliers are only winning contracts worth 55% of this total expenditure. In both Germany and France, around 98% of the value of public contracts are won by companies within their borders.

According to ValueWales (an internal unit within the Welsh Government), every 1% in procurement increase will create 2,000 FTE jobs, therefore 20 extra percentage points would create 40,000 jobs. Our policy will create 40,000 new private sector jobs and cut unemployment by 40%.