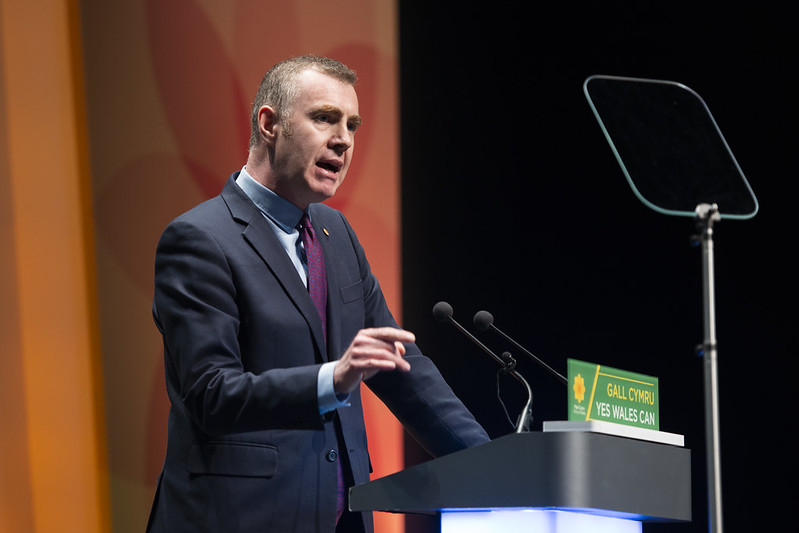 This article originally appeared in the Sunday Times

Independence is the most radical idea in Welsh politics today.

It means building anew. It means starting a new state from scratch. It means that all the old ways of thinking, the old structures and systems of power, the mould and the dust, are stripped away.

The last two polls on independence put it on its highest support in history and an argument once derided as a pipe dream has moved from the margins to the mainstream. We can see it. We can sense it.

But to turn the seed of that practical dream into our radical new reality we need to combine hope with determination.

Next May’s election will mark a pivot of change that will determine the history of Wales and, indeed, the whole of Britain in the 21st Century. We are living through the emergence of a New Wales, but also a New Britain too.

The futures of Welsh agriculture, manufacturing and our ports are currently being bartered in Brussels – with no Welsh seat and no Welsh voice at that table.

Devolution also died this week – not my words, but those of a Labour Member of the Senedd in the debate on the Legislative Consent Motion for the Internal Market Bill. Devolution is not a sustainable end-state and never can be in a country where Westminster will always reign supreme.

The question to us is in Wales is this: are we content to be passive bystanders at a funeral or celebrants of a new birth and a new beginning?

I do not believe that we can any longer afford the luxury of leisurely, incremental change, constantly having to accommodate the crabbed conservatism and suspicious caution of Welsh Labour. What our nation needs now is new leadership, not old management.

And the ultimate encapsulation of that will be independence itself.

When I launched my Seven Steps to Independence proposal as part of my leadership campaign in 2018, I suggested holding an Independence Referendum in 2030, following a decade-long process of “nation-building” and debate about Wales’ constitutional future – mindful of the fact that we must not just secure a referendum on independence but win it too.

The Independence Commission I established last year and that reported back last September also adopted that kind of timescale as the basis for its recommendations. However, the momentum of change now means that this period must be foreshortened.

Devolution - that most basic democratic principle that decisions affecting Wales should be made in Wales - is under attack from Boris Johnson’s Conservatives as even the Welsh Government acknowledges.  Westminster has never seen itself as Wales’ partner in constitutional terms, but now it is devolution’s enemy openly seeking every opportunity to subvert and reverse our hard-won democracy.

Change elsewhere in these islands continues to accelerate. The demand for another independence referendum in Scotland is becoming unstoppable, notwithstanding Boris Johnson’s objections. By 2025 Scotland could well be an independent country.  And Brexit has also given further impetus to the calls for a united Ireland.

These pressures, becoming stronger by the day, means that Wales is in real danger of being be left behind as part of a rump United Kingdom, in a new England-and-Wales formation – which would be the ultimate worst of all worlds.

That is why I pledge that, subject to party approval, a Plaid Cymru Government, able to command a majority in the Senedd, will offer a referendum on independence for Wales in its first term.  From 1997 to 2011, a gap of fourteen years took us from Assembly to a Parliament.  By 2025 fourteen years will have elapsed again and it will be right to give the people of Wales the chance to choose an independent future.

Deciding the constitutional future of Wales cannot be for any one faction or political party, but for the people as a whole. Our Welsh Constitution won’t just have founding fathers but mothers, sons, and daughters too.

This is the spirit of the New Wales.  We can feel it stirring around us.  It’s in the surge of support for the independence movement. It’s in the crumbling walls of the Westminster parliament – its politics like its architecture in irreversible decay. It’s in the discovery that there are influential governments in Edinburgh, Belfast, and Cardiff more capable than the Westminster cabal. Above all, it’s implicit in the present Covid crisis - the sense that something new and better must come out of this.

In the spring, next May I believe that feeling will be palpable. The people of Wales have been through so much in these past months, they will not want to waste the opportunity offered to them.  The electors won’t just want to carry on with the Old Wales. They will be looking for a new direction, one that offers hope, vision, ambition.

They will be looking for a New Wales.

It is our job in Plaid Cymru to provide that hope for real, radical change.

On highways and byways, the traffic moves to the beat of YesCymru on the bridges above. Banners and marches fuel our fire, but the Welsh spring can only truly bloom at the ballot box in May. If you want independence, you have to vote for it.

Unionists may cook up another fake faux-federalist vow.

But we can make a real “vow” together – a vow to work hard to win hearts and minds, to take others on the journey from sceptic to supporter, and to secure the fairest democracy of all, one where decisions about Wales are made in Wales.

And while hollow words still ring around the hallowed halls of Westminster, we will keep our vow, for Wales.