The Labour Welsh Government's pandemic stockpile went without a crucial piece of PPE for THREE YEARS, Plaid Cymru has discovered.

That's right. The Labour Welsh Government’s pandemic stockpile didn’t contain any surgical gowns prior to the Coronavirus crisis hitting Wales. How did this come to light? And why does it matter? Let's break it down...

"Gowns were not included"

The First Minister admitted in a letter to Plaid Cymru Leader Adam Price that there were no gowns in the Welsh Pandemic Stockpile between June 2016 and February 2020. This comes after the UK Government were forced to admit the same by a BBC Panorama investigation on April 27th. 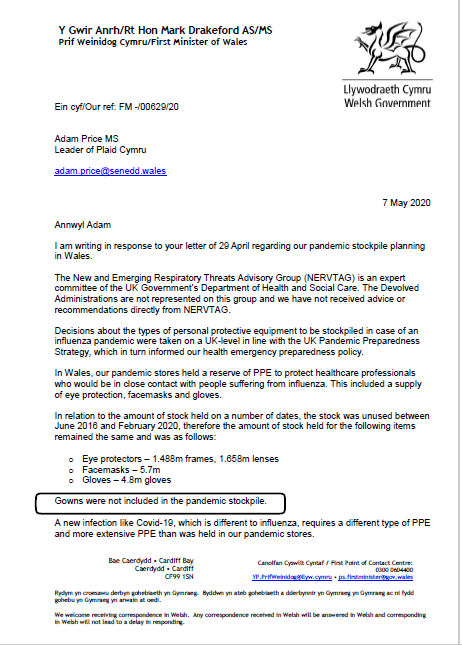 ...but that's not what the Health Minister said!

This directly contradicts the claim made by the Labour Health Minister Vaughan Gething when he responded to Andy Davies of Channel 4 News at the Welsh Government press conference on April 28th that the Welsh Pandemic Stockpile did include gowns when Coronavirus first arrived in the UK.

I’d asked the Health Minister what the @WelshGovernment had in terms of gowns, visors, swabs & body bags in its pandemic stockpile when the Covid-19 outbreak reached the UK 👇https://t.co/45nucJwcyF

The First Minister's admission surely does the same for the Welsh Labour Government.

Last night’s @BBCPanorama exposed government failures to provide our brave NHS staff with the life saving PPE they need. Ministers shouldn’t be trying to rubbish the contributors, they should take responsibility and ensure our NHS & care staff have the PPE they need. https://t.co/CGfJ0GGYcS


Failure to plan for a pandemic

NERVTAG, a UK Government body that advises on new viruses, recommended that gowns should be added to the Pandemic Stockpile in June last year. The Welsh Government, like the Westminster Government, failed to do that by the time the Coronavirus outbreak began.

The Welsh Government says it's not represented on NERVTAG. But it did have a representative on its PPE sub-group when it was formed in 2016. It's not clear yet if anyone in Welsh Government saw the June 2019 recommendation or if this potentially life-saving advice was withheld. 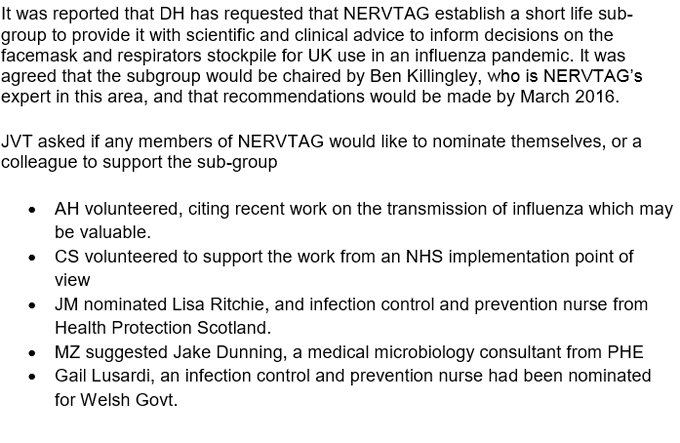 The failure to add gowns to the Pandemic Stockpile in line with expert advice has had very real consequences for front-line staff. The BMA in Wales, for example, says 27% of doctors have reported shortages of gowns. The Welsh Government might argue that they had gowns in their regular stock so it didn't matter that they didn't have it in their Pandemic Stockpile. But NHS Wales held just 8,792 fluid resistant gowns at the end of January, enough for just two days at the current rate of use.

In his letter to Plaid Cymru Leader Adam Price, the First Minister says "Decisions about the types of PPE to be stockpiled in event of an influenza pandemic were taken on a UK level.
We must never make that mistake again. Trusting Westminster to make decisions for us has cost us dearly in this pandemic. Never again.
Plaid Cymru Leader Adam Price raised all of this in the Senedd today. The only thing that we learned that was new was that the First Minister apparently doesn't read his own letters.

REVEALED: Labour Welsh Government didn’t have any gowns in their pandemic stockpile before Coronavirus hit - contrary to what the Health Minister said. pic.twitter.com/dWGe8p0G7x