Candidate for Vale of Clwyd 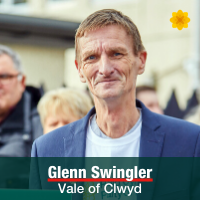 Tell us about yourself

I am fifty eight years old and have been married to my wife Beth for over thirty years. I'm a father to two older children and a grandfather to four younger children. I live in Denbigh and am both a county and town councillor. I work as an adult mental health support worker in town.

What is the most important thing you think the Senedd should do in the next five years?

Wales needs the powers to provide for the people of Wales. That’s why I believe an independence referendum, in the Senedd first term, is paramount.

Whoever we are, wherever we come from, whatever language we speak, we should be able to make our own decisions about the future of Wales.

What will you do for Vale of Clwyd if elected?

Local people are being priced out of their communities with unsustainable levels of second homes in depriving the ability of local people to access homes in those communities.

I would prioritise building real affordable housing – ensuring everyone has the right to a roof over their heads.

Taking people out of poverty would be a major priority of a Plaid Cymru Government – ensuring a real living wage and free school meals to all children in families on universal credit.