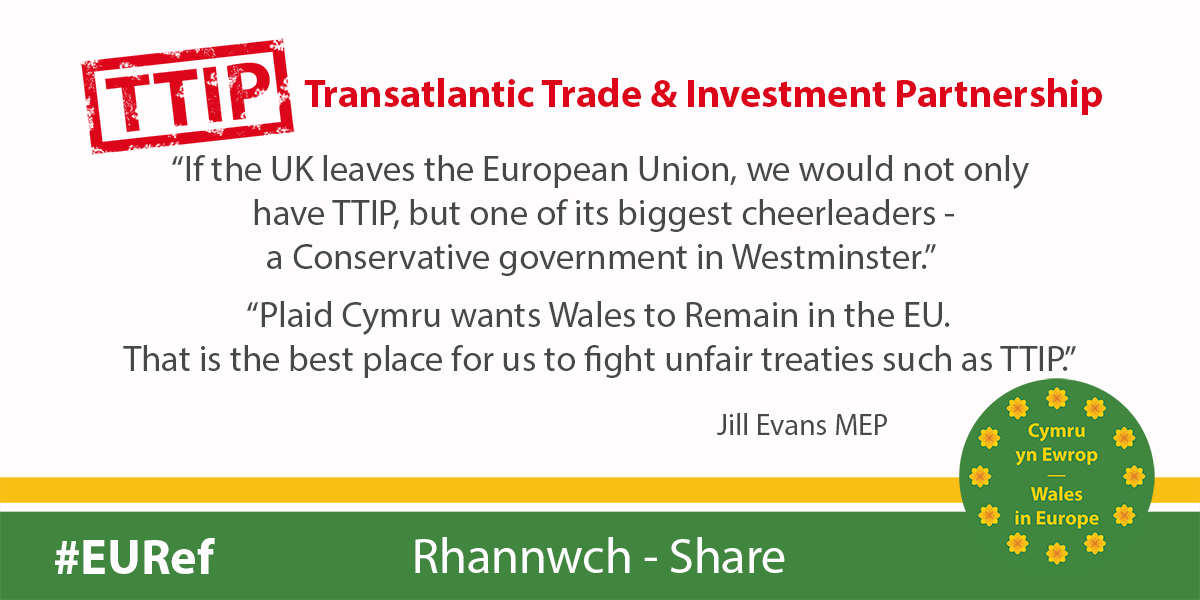 The proposed Transatlantic Trade and Investment Partnership (TTIP for short) is being debated between European Union and USA negotiators and widely believed to include clauses that could mean secret courts, the opportunity for multi-national companies to challenge legislation on workers’ rights, language rights and climate change prevention and to privatise the NHS.

However, as this is supported by the UK Government, there is no link between the European Union referendum and being able to stop the TTIP treaty.

“Plaid Cymru has consistently opposed proposals believed to be in TTIP that undermine the transparency of our justice and democracy – but TTIP itself plays no role in the EU referendum debate.

“At the moment, TTIP is being debated at an EU-US level, but is supported by a right wing UK Government that wants to reduce what it calls red tape, but we think of as being life-saving health and safety issues such as food hygiene and a public NHS.

“If the UK leaves the European Union, we would not just still have TTIP but one of its’ biggest cheerleaders. In fact, TTIP would almost be inevitable under a Conservative government in Westminster.

“Plaid Cymru believes in a different and more transparent Europe, with a focus on social issues such as better pay for workers, an end to zero hours contracts and a genuine Living Wage, but we can only achieve those goals if we remain inside the EU.

“Plaid Cymru wants Wales to Remain in the EU, and that is the best place for us to fight unfair treaties such as TTIP.”