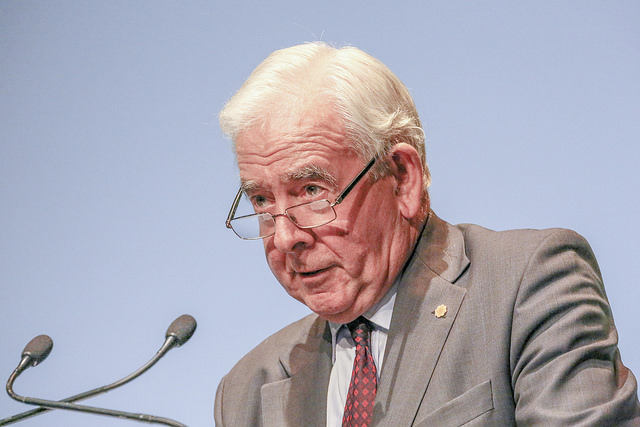 Plaid Cymru peer, Dafydd Wigley, has called for a ‘Brexit triple-lock’, arguing that unless the Government gives Parliament a vote on the outcome of the negotiations, the public should be asked to approve the outcome themselves.

The former leader of Plaid Cymru has outlined three steps the Government should take to ensure the public is fully consulted on the future relationship between the EU and the British State.

He called for the UK Government to outline its preferred outcome before Parliament votes on triggering Article 50, and unless they do so, called for the Parliaments of the UK, including the devolved national Parliaments, to retain the right to withdraw their support for Article 50 being triggered. Failing that, Lord Wigley says the public should be consulted once more in a referendum on the outcome of the negotiations with the European Union.

The Plaid Cymru peer, who campaigned for a Remain vote, says he respects the outcome of the referendum but argues that leaving the European Union should not mean leaving the single market and the customs union.

“I make no secret of the fact that I deeply regret the decision of the people to leave the European Union but I also accept that the outcome of the referendum cannot be ignored.

“However whilst people voting in that referendum knew exactly what they were voting against – our membership of the European Union – they did so for a variety of different reasons. Some did so to redirect £350 million every week to the NHS; some small business owners wanted to see a reduction in EU regulation; and others wanted to see a reduction in the level of immigration into the UK. Whatever their reasons, they knew what they wanted to end - our membership of the EU.

“What they did not have an opportunity to state however, was what they wanted in place of EU membership. Different Leave campaigners advocated different options. Some wanted a Norwegian-style model, which would maintain our membership of the single market; others advocated relationships such as those negotiated by Albania, Turkey or the Ukraine; some wanted a Canada-style deal – which took eight years to negotiate; and others were content that we should have no special links with the single market at all, accepting that this would mean tariffs being placed on the exports of Welsh products into Europe.

“There has been no decision of the people on this new relationship. The referendum may have given a mandate to quit the EU but it did not provide a mandate for which alternative option the government should seek. Neither has the present Conservative Government got a mandate from a general election - their policy at that stage was to remain in the EU.

“This is why Parliaments – including the national Parliaments of Wales and Scotland, and the Northern Ireland Assembly – must play a role in deciding on the new relationship.

“It is crucial that the Government makes public its preferred Brexit option before Parliament is asked to vote on Article 50. If they refuse to do that, then Parliament should retain the right to withdraw its support for Article 50 if the outcome of the negotiations is unsatisfactory. If the government cannot agree to those conditions, then it is entirely reasonable to demand that the public be consulted again, through a referendum on the outcome of the negotiations.

“It is right the people who took the decision to leave the EU should have the final say on whether they are content to do so, on the terms the Government has negotiated.