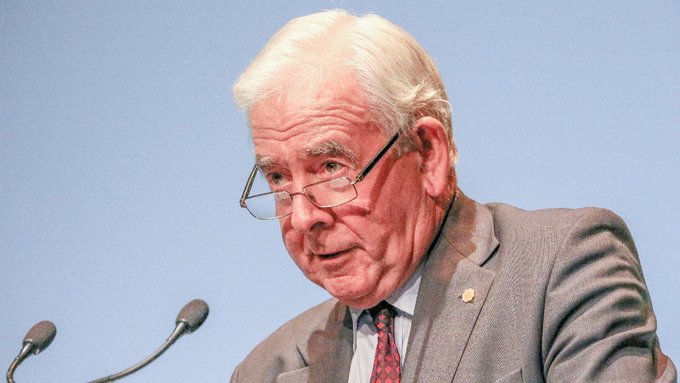 Speaking at a pro-Europe rally in Cardiff today (Saturday 14th October), Plaid Cymru Hon President, Dafydd Wigley has asserted that this week has been a critical week for Wales with regard to our future relationship with Europe.

Speaking at an open-air rally in Queen Street (12.30pm) he stated:

“This week has been a definitive wake-up week for Wales. It’s become clear that negotiations in Brussels are failing to deliver any semblance of a deal. Prime Minister May has recognized this by stating on Monday that her Government are planning for every eventuality, including a no-deal outcome.

“The remaining 27 member states are moving forward to get a new trade agreement, in whose negotiating the UK will play no part.

“What we are facing is the hardest of hard Brexits. We are being allowed to jump without a parachute. We are heading for a disastrous crash-landing.
“In these circumstances, it would be utterly wrong - misguided and pig-headed – to take such an irreversible step into the unknown, without the full and final consent of the people of these islands.

“If it is, indeed, the settled view of the voters that we should quit the EU without a deal, then that judgement must be respected and delivered. The people have every right to choose a totally unchartered course to an unpredictable future.

“But with the stakes so very, very high, there must be a final ratification process before the eject button is pressed.

“If by January, 2019 there is no deal sealed, signed and delivered – as now looks increasingly likely – there should be held in that month, a confirmatory referendum. If the people vote “Yes”, then Britain should quit the EU on the basis which the Government have recommended. But if the people vote “No”, the Article 50 application should be finally and irrevocably withdrawn.

“Then this whole sorry saga could be put where it belongs – into the dustbin of history and buried in the deepest ocean, never to be seen again. We can then return to the serious matter of building harmony and co-operation in Europe and our industry, farmers, universities and tourist operators can plan a secure future, free from the present unnerving and unnecessary uncertainties.”