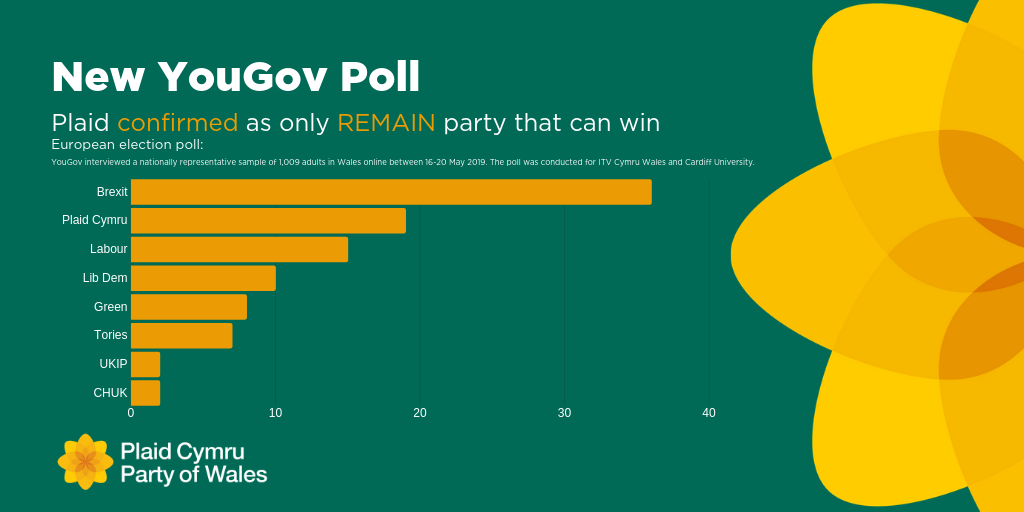 A new YouGov poll for ITV Cymru Wales and Cardiff University has confirmed that only Plaid Cymru can beat Brexit.

This poll comes on the day that Wales for Europe Chair, Geraint Talfan Davies, and Welsh Government Europe Adviser, Hywel Ceri Jones, urged people to back Plaid Cymru to beat Brexit in the European election.

Among those indicating that they would vote, and giving a party preference, these are the levels of support for each party that YouGov found (with changes from our previous Barometer poll, in April, indicated in brackets):

Commenting on the results of poll, which put Plaid Cymru in second place in the European election, a Plaid Cymru spokesperson said:

“Just three days ahead of the European election, this poll proves beyond all doubt that Plaid Cymru is the only Remain party that is on course to win in Wales.

“A growing number of people are realising that the European election is now a binary choice between Plaid Cymru and the Brexit party. Liberal Democrats and Greens simply cannot win here.

“This makes our appeal to the supporters of other Remain-supporting parties all the more pertinent: the only way to beat Brexit is to vote for Plaid Cymru.

“If Lib Dems and Greens, and disillusioned Labour voters, lend Plaid Cymru their votes, we can win a majority for Remain on Thursday.

“Our call to them is now urgent: voting for any party other than Plaid Cymru risks handing success to the Brexit party.

“This poll confirms that if you want Wales to remain in the EU, your only viable option in the European election is to vote Plaid Cymru.”