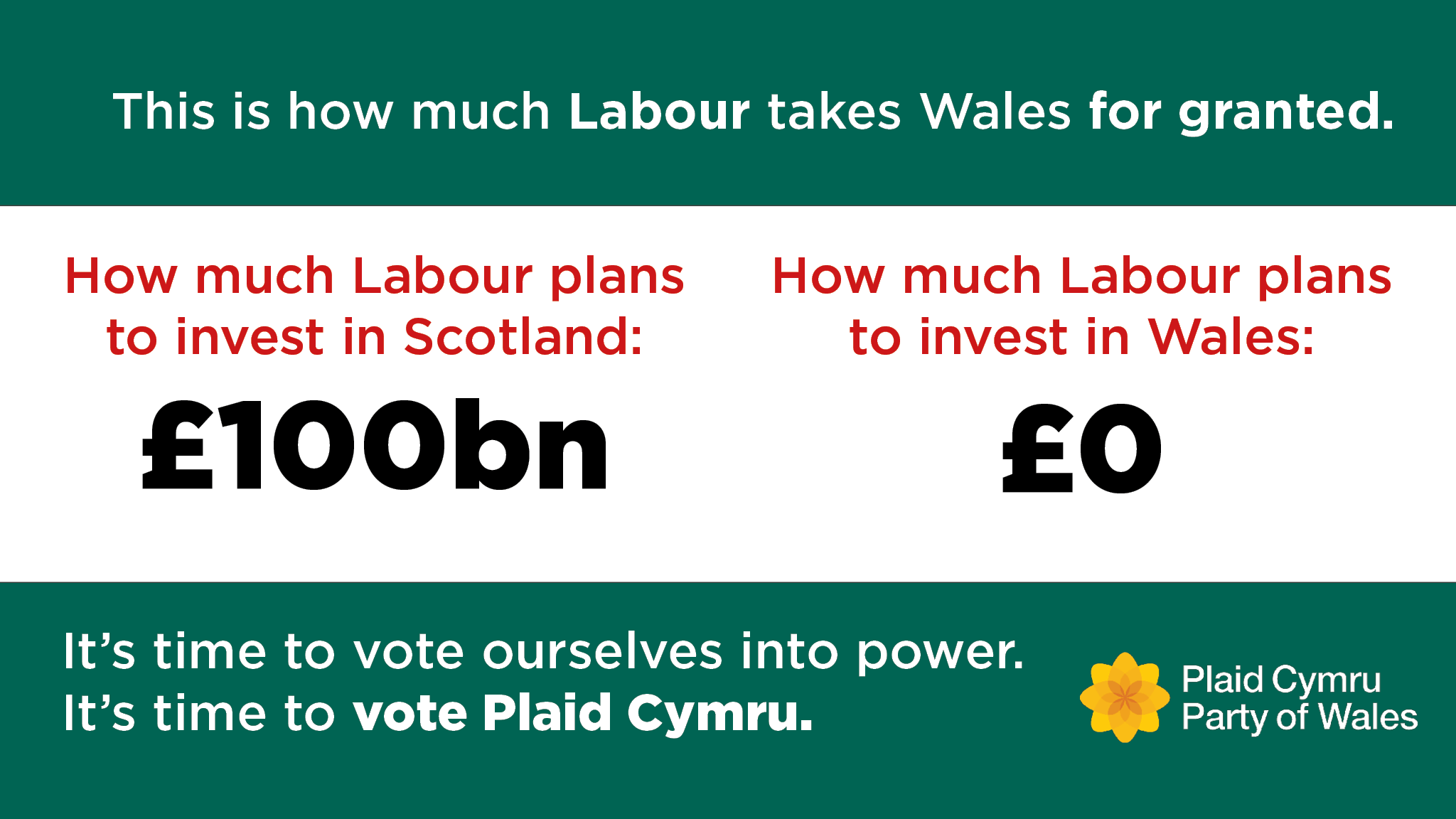 Plaid Cymru Leader Adam Price has condemned the Labour Party over its campaign pledge to invest £100bn worth of capital investment for Scotland over a period of ten years but making no such commitment for Wales.

Plaid Cymru Leader Adam Price has condemned the Labour Party over its campaign pledge to invest £100bn worth of capital investment for Scotland over a period of ten years but making no such commitment for Wales.
Plaid Cymru Leader Adam Price said it showed how much the Labour party took Wales "for granted".
Mr Price said that Labour's claims that their proposed Barnett consequential for Wales for current expenditure will be £3.4bn higher by 2023/24 was 'misleading' and that it would actually be lower than the increase in current spending under Plaid Cymru's plan, which would be £1.0bn next year.
Mr Price added that the manifesto left Wales in a weaker position than Scotland and that the pledge to reform the flawed Barnett formula and look at fairer funding for devolved nations that had been in the UK Labour Manifesto in 2017 had now been dropped.
Mr Price pointed out that the pledge to devolve justice and policing had also been dropped.
The Plaid Cymru Leader said the absence of ambition and investment showed 'the disregard and disrespect Labour had for Wales' and that it was time for Wales to vote for a party that has 'Wales, not Westminster' at the top of its priorities.
Plaid Cymru Leader Adam Price said,
"The absence of any commitment to invest in Wales shows how much Labour take the people of Wales for granted.
"They'll invest a massive £100bn in Scotland over a period of ten years but leave nothing for Wales. On a proportionate basis Wales should receive £60bn of investment over ten years. Why is there no such commitment from Labour? They then say we should be grateful for the £3.4bn of Barnett consequentials in four years time. It's insulting.
"They're also refusing to commit to a fairer funding formula for the devolved nations which currently leaves Wales in a much weaker position than its counterparts. They also have backtracked on their promise to devolve justice and policing to Wales which would right the dreadful injustices currently suffered by our citizens in the flawed 'England and Wales' justice system.
"The absence of any ambition and investment shows the disregard and disrespect Labour have for Wales.
"Decades of underinvestment from the Westminster parties has left the communities of Wales struggling to make ends meet. In Wales, under a Labour government, almost a third of our children are living in poverty, A&E waiting times are at their highest, and the housing crisis is only perpetuated by Labour's failure to build more council houses.
"Plaid Cymru believe that Wales has potential. But for generations our country has put its faith and loyalty in the Westminster parties – Labour and the Tories, and get nothing in return.
"The only way for Wales to deliver real change is to vote for a party that has Wales, not Westminster, at the top of its list of priorities. That party is Plaid Cymru.
Do you like this post?
Share Tweet