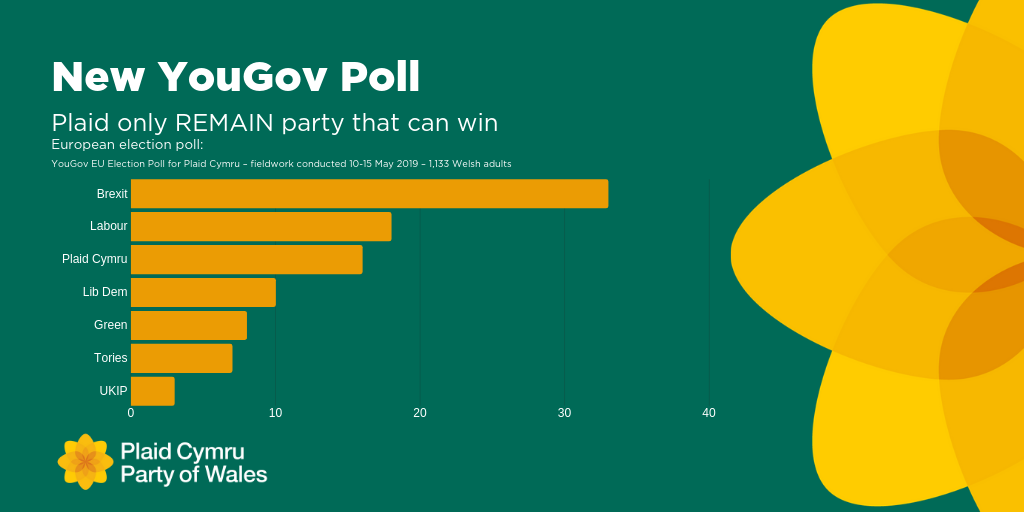 Plaid Cymru is appealing to pro-Remain voters to give them their support in the European election in order to secure a majority for Remain.

A YouGov poll on European voting intentions conducted for Plaid Cymru has put the party at 16%, meaning it is beyond doubt that Plaid is the only pro-Remain party that can win seats in Wales in the European election.

The poll, which puts the Liberal Democrats at 10% and the Greens at 8%, shows that Plaid Cymru is the only viable option for pro-Remain voters in the 23 May European election.

The party is appealing to pro-Remain supporters of those and other parties to give it their vote in order to ‘secure a majority for Remain’.

If supporters of the Liberal Democrats, Greens, and Change UK back Plaid Cymru, it would mean Remain winning two seats, pushing the Brexit party to second place.

The opinion poll also shows support continuing to fall away from Labour, with the party having fallen 12% since the April Wales Political Barometer, in light of the Labour leadership’s poor handling of Brexit and its attempt to facilitate a Tory Brexit.

Plaid Cymru has said that “disillusioned and disenfranchised” Labour voters should lend their vote to Plaid, as the only pro-Remain party that can win in the European election.

“This poll makes absolutely clear that Plaid Cymru is the only Remain party that can win in Wales. We are the party on the up and we are the only viable option for Remain supporters.

“Parties like the Liberal Democrats and Greens simply cannot win in Wales. I am appealing to their voters to back Plaid Cymru in the European election because we are the only realistic option for those seeking to beat Brexit.

“I am also appealing to disillusioned and disenfranchised Labour supporters, who have had enough of their party leadership’s attempts to facilitate a Tory Brexit, to lend their vote to us in order to secure a majority for Remain.

“In just one week’s time, the people of Wales have the opportunity to show that we reject Westminster’s broken Brexit by voting for the only pro-Remain party that can win in the European election.

“My message to all voters is this: in the European election on 23 May, give your vote to Plaid Cymru, and together, we can beat Brexit.”

All figures, unless otherwise stated, are from YouGov Plc.  Total sample size was 1,133 adults. Fieldwork was undertaken between 10th - 15th May 2019.  The survey was carried out online. The figures have been weighted and are representative of all Welsh adults (aged 18+).