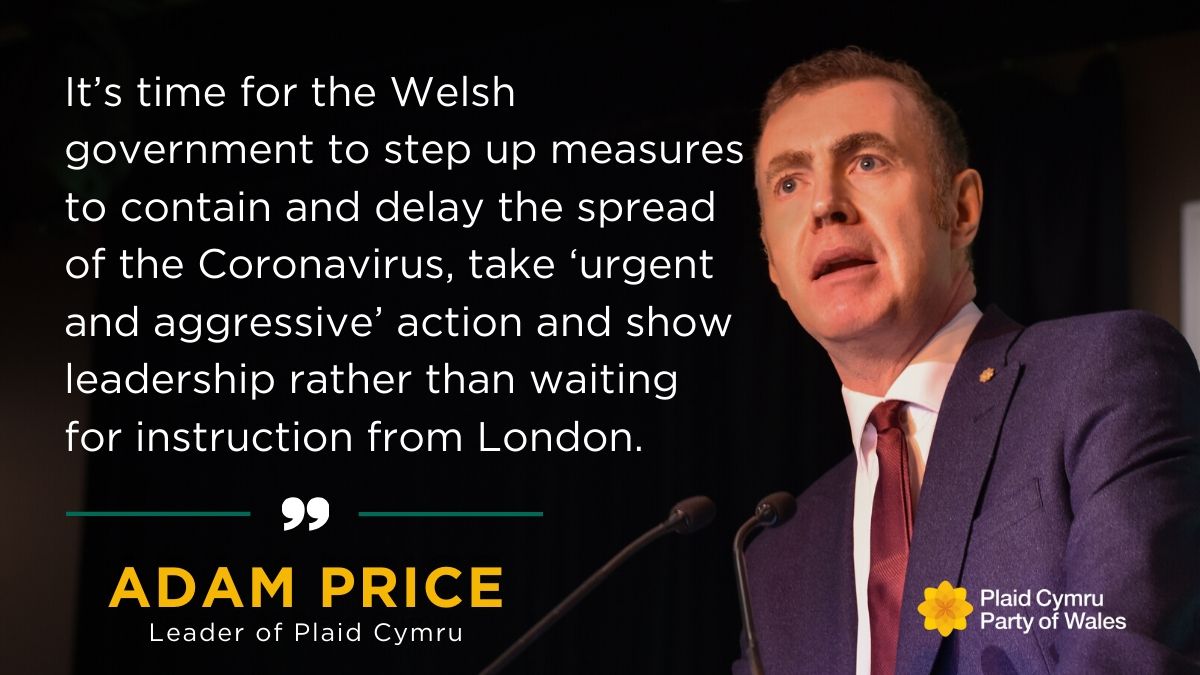 Plaid Cymru Leader Adam Price has called for the UK and Welsh Government to “step up” measures to contain and delay the spread of the Coronavirus.

The Plaid Cymru Leader said “all mass gatherings” should be “postponed or cancelled” with immediate effect - adding that the Six Nations match in Cardiff this weekend should also be postponed to a later date.

Mr Price said that “social distancing” could “smooth the curve” and delay the spread of the virus and suggested a package of contingency measures the Welsh Government could adopt which would be to instruct people to work from home where possible, close schools and colleges, and ramp up testing and set up temporary care units.

Mr Price said the “safety” of vulnerable and at risk citizens should be “put before everything else”.

The Plaid Cymru Leader added that “all political leaders” should realise that actions taken “today” could mean the “difference between life and death” and said they owed it to people to “do the right thing”.

Plaid Cymru announced they had cancelled their Spring Conference earlier today due to the pandemic.

“The safety of our citizens - including the most vulnerable and at risk of Coronavirus, must be put before everything else.

“It’s time for the Welsh government to step up measures to contain and delay the spread of the Coronavirus, take ‘urgent and aggressive’ action and show leadership rather than waiting for instruction from London.

“Social distancing can smooth the curve and delay the spread of the virus. As part of a package of measures, the Welsh Government should consider instructing public sector workers to work from home if possible. We should also give serious consideration to whether all schools should break up early for the Easter holidays and the Education Minister should give an urgent statement on the viability of e-learning and any impact on upcoming GCSE and A Level exams.

“All mass gatherings and events should be postponed or cancelled with immediate effect – that would mean no indoor gatherings larger than 100 and no outdoor gathering larger than 500. The Six Nations match in Cardiff this weekend postponed to a later date. Testing should be ramped up and temporary care units need to be set up.

“All political leaders must realise that the actions we take now, today, could mean the difference between life and death later on. We owe it to our people and our communities to do the right thing. The public will expect nothing less.