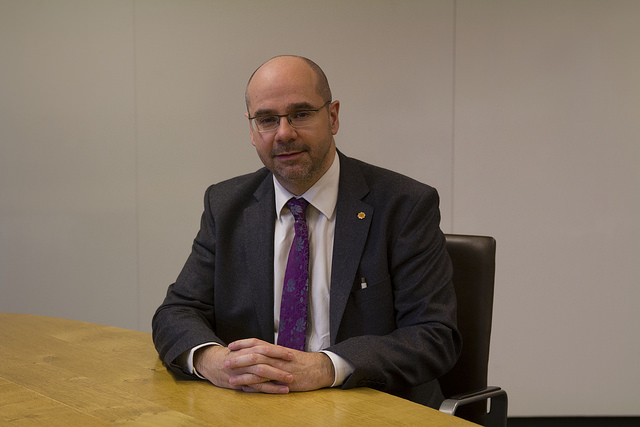 Plaid Cymru AM for Mid and West Wales Simon Thomas has called the prosecution of Carme Forcadell “undemocratic and an offence to the popular will of the Catalan people”.

Forcadell today faces prosecution by the Spanish courts on charges of corruption and disobedience for having allowed a vote in the Catalan parliament related to the independence process.

“I’ve raised this issue in our own Parliament and the Welsh First Minister has promised to examine the situation. The fact that Ms. Forcadell is facing prosecution for simply allowing a debate on the future of her nation is an outrage to democracy.

“The Spanish courts are being politicised in an attempt to suppress the Catalan government’s plan to give the Catalan people a referendum on the future of their nation. This judicial dispute is undemocratic and is an offence to the popular will of the Catalan people.

“In a democratic country, as we have seen in Scotland and in Wales, a debate on the future of one’s nation is crucially important to show that that nation can move forward, step by step together in that process.

“Plaid Cymru, as a party that believes in the right of nations to self-determination, condemns any attempt to block that democratic process.

“We should all stand in support and solidarity with the president of Catalonia’s parliament and indeed the whole of Catalonia.”

A statement of opinion has been tabled by Simon Thomas at the National Assembly expressing concern about the case. It has received support from Plaid Cymru Assembly Members Neil McEvoy, Bethan Jenkins, Elin Jones, Llŷr Gruffydd, and Labour’s Mike Hedges.