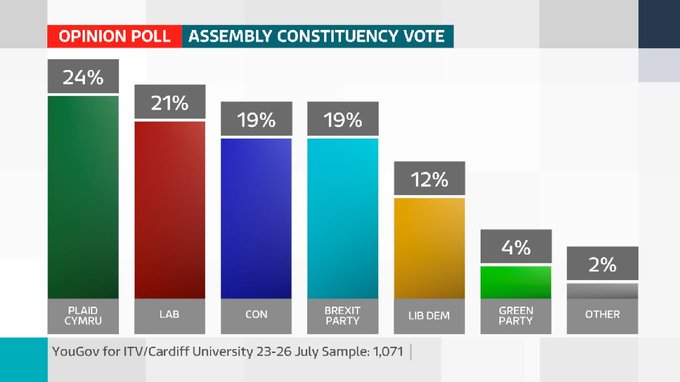 For the first time in its history, Plaid Cymru has topped a new opinion poll, released today, of Assembly voting intentions.

The poll, by YouGov for ITV and Cardiff University, places Plaid Cymru at 24% in the constituency vote and 23% in the regional vote – ahead of Labour and all other parties.

The party’s leader, Adam Price AM, said the poll represented an ‘historic moment’, where people in Wales are seeing that a ‘better future’ is possible.

Mr Price said that people are turning to Plaid Cymru as the only party with a positive vision of ‘Wales’ future as an independent nation at the heart of Europe.’

That follows this weekend’s huge rally in Caernarfon, where 8,000 people marched in support of independence for Wales.

“This poll is an historic moment for Plaid Cymru. It is a turning point – people in Wales are seeing that a better future is possible. There can be no doubt now that Plaid Cymru is on track to form the next government of Wales – a government to thoroughly transform our nation and its fortunes.

“Between the Tories’ obsession with Brexit and Labour’s endless prevarication, people have had enough, and they’re turning to Plaid Cymru as the only party that is setting out a positive vision of Wales’ future as an independent nation at the heart of Europe.

“With less than two years to go before the Senedd election, Plaid Cymru will continue sharing our positive message with people in communities up and down Wales – and we look forward to forming a Plaid Cymru government in 2021.”