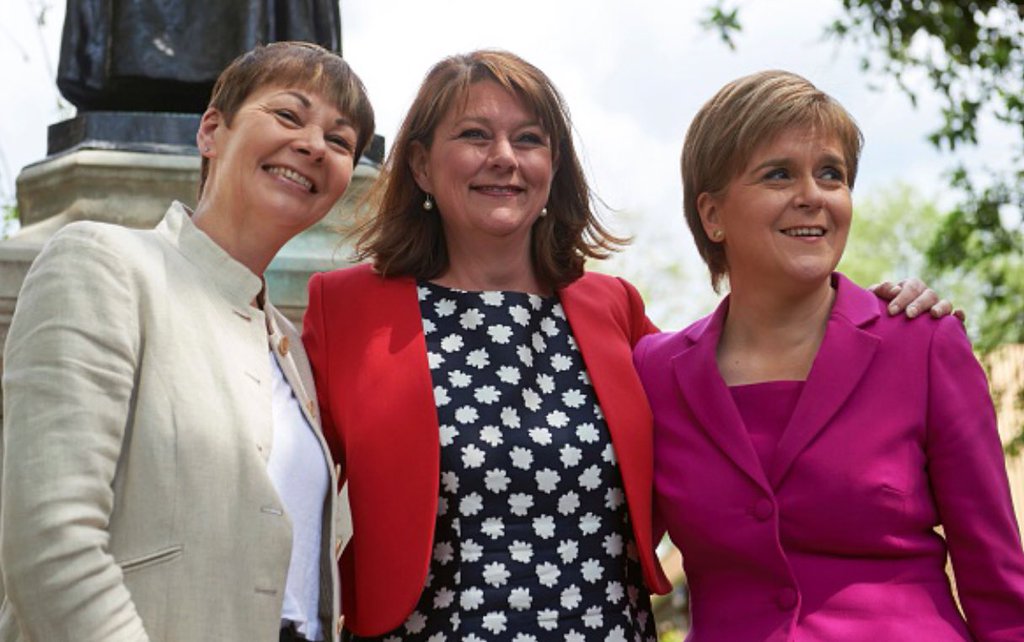 Scotland’s First Minister Nicola Sturgeon, the leader of Plaid Cymru Leanne Wood and Green MP Caroline Lucas have today called on those who share progressive values, believe in the protection of human and social rights and support equality to back membership of the EU in the referendum next month.

Encouraging people to register to vote, in order to protect the benefits of the EU the three leading politicians met in the shadow of the statue to Emmeline Pankhurst at Westminster to issue a joint statement in support of EU membership.

“Membership of the European Union has brought us social and economic rights that have made us more prosperous, made our society fairer and have created real opportunities for our young people and our economy.

“The EU delivers benefits that we take for granted every day. For many young people the right to work and to travel in other EU countries is part of their journey into adulthood.

“For parents the rights to maternity and paternity leave now considered normal have been hard won with the help of the EU.

“To leave the EU, would be to take the risk of leaving those hard won rights and opportunities in the hands of a Tory government that simply cannot be trusted, and to isolate the UK at a time when we should be working with other countries to tackle climate change, to address the refugee crisis or to deal with security issues.

“The threats and the fearmongering characterising the debate over EU membership from both sides, must stop. It is time for an informed debate on the merits of EU membership and the importance for all those of us with progressive values of remaining members of the EU.”

“Europe matters to all of us, everyday. Not only is our membership of the EU good for our economy but it also protects our hard won rights at work, guards our environment from cross-border pollution and gives us the right to live, study and retire across an entire continent.

“Of course the EU isn’t perfect – but we’re only going to make it more democratic and accountable if we remain a member and fight to make it better.

“The bitter campaign so far – and the myth-fueled attacks orchestrated by Vote Leave – haven’t done justice to the importance of this referendum. Over the course of the next month the Green Party will be working with others in making a positive case for Britain remaining in the EU.”

“Wales is stronger, safer and better off as part of the European Union. Around 200,000 jobs in Wales depend on access to the single market, and thousands of our students benefit from being able to study overseas.

“Because of our membership of the EU, we have laws on equality, the environment, on workers' and consumer rights, on farming and food quality, laws to tackle climate change and much more. Cross-border cooperation makes us safer and it is important that these ties are protected.

“Plaid Cymru wants Wales to have a stronger voice in a reformed European Union because we know that Wales is better off in, and over the coming weeks we will be presenting our case for a strong and prosperous Wales within a reformed and improved Europe."

In exactly one month’s time the people of our three nations will be voting in a referendum that could prove to be defining for a generation.

As parties who share progressive values, a belief in equality and in protecting our environment we believe that membership of the EU is an important part of embedding the rights and protections we rely on.

The European Union is not perfect and we would each propose changes, but we believe that the benefits of the EU are significant.

The EU is good for working people across Scotland, Wales and England - with rules limiting the amount of hours we have to work, providing equal treatment for part-time and agency workers and guaranteeing health and safety at work.

Being a part of the European Union is good for women. From maternity and paternity leave for parents, work place rights during pregnancy, to rules protecting against harassment and unequal treatment, women in Britain benefit from the EU. Crucially, these rules – which span the continent – help halt a race to the bottom of firms trying to find the least protected workforce where workers enjoy the fewest rights.

The EU also gives us all the freedom to live, work, study and retire in any one of 28 countries.

That freedom of movement – which has been so beneficial to our economy here in the UK – is often the focus of attack by other parties, but we celebrate it and call on the Government to do more to ensure that it works for everyone.

Being a part of the EU is good for our young people, allowing them the freedom to explore the continent, learning as they go and in turn, returning home with a wealth of knowledge and perspectives that creates a society that is truly outward looking.

The EU isn’t just an abstract concept - it matters to all of us every day. It’s our right to get home from work in time to see our families, it’s the air that we breathe, it’s clean beaches on our holidays , it’s equality between men and women in the workplace and it’s the historical anomaly of living in a Europe of lasting peace between neighbours.

Across our three parties we believe that membership of the EU is ultimately in the best interests of the UK and of Scotland and Wales.

For us the choice on June 23rd is simple: does being a member of the European Union make Britain fairer, more prosperous, greener and safer? The resounding answer is yes – which is why we’ll be spending the next four weeks making the positive case for EU membership.