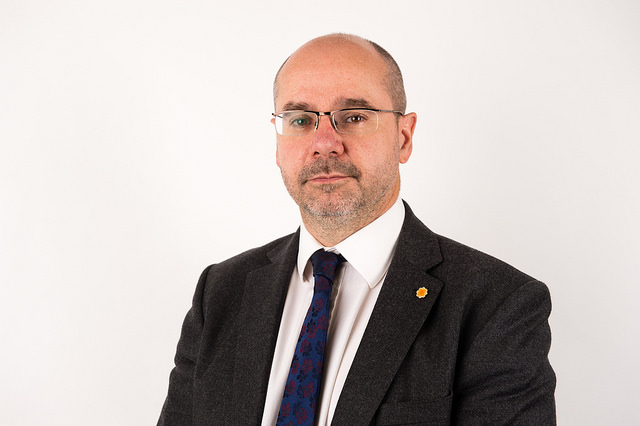 The Shadow Cabinet Secretary for Energy, Climate Change and Rural Affairs Simon Thomas AM has again asked the First Minister for clarity on assurances regarding ongoing discussions with the UK Government about Brexit.

The Plaid Cymru AM for Mid and West Simon Thomas, speaking during Tuesday’s plenary at the Senedd, wanted assurances regarding the future of the Welsh agricultural sector.

The Welsh Government’s Cabinet Secretary for Environment and Rural Affairs had recently met with Ministers from both the UK Government and devolved administrations on 23 February in Edinburgh. The Plaid Cymru AM was keen to understand what happened in that meeting following troubling reports from Scottish counterparts.

Simon Thomas AM, a member of the Climate Change, Energy and Rural Affairs committee, stated:

“I’ve been interested in what happened in that meeting in Edinburgh. The Scottish rural economy Secretary, Fergus Ewing, said that the meeting achieved nothing and no factual information whatsoever on any of the serious matters that have been raised by farmers.

“Roseanna Cunnigham, who is the environment Secretary in Scotland, said that there had been a deflection at the meeting by Andrea Leadsom whenever the devolution issue was raised, and Scotland’s Brexit Minister, Mike Russell, said that Andrea Leadsom may have been at a different meeting than everyone else.

“This follows the UK Minister of State for Agriculture, Fisheries and Food George Eustace’s last minute refusal to attend a public scrutiny session of the Welsh Assembly’s Climate Change, Energy and Rural Affairs committee to answer questions on agriculture after we leave the European Union.

“Yet again, the UK Tory Government are leaving the Welsh people in the dark over the future of our vital agricultural sector. Does the UK Government actually understand what devolution of agriculture and environmental policies means?

“The people of Wales deserve a transparent, effective and beneficial exit of the European Union but the Tory Government are standing in the way. The First Minister must to everything in his power to ensure that the UK Government understand their responsibilities to Welsh Farmers and assure us that the Welsh Government will not allow any land grab of our devolved policies by the Conservatives.”