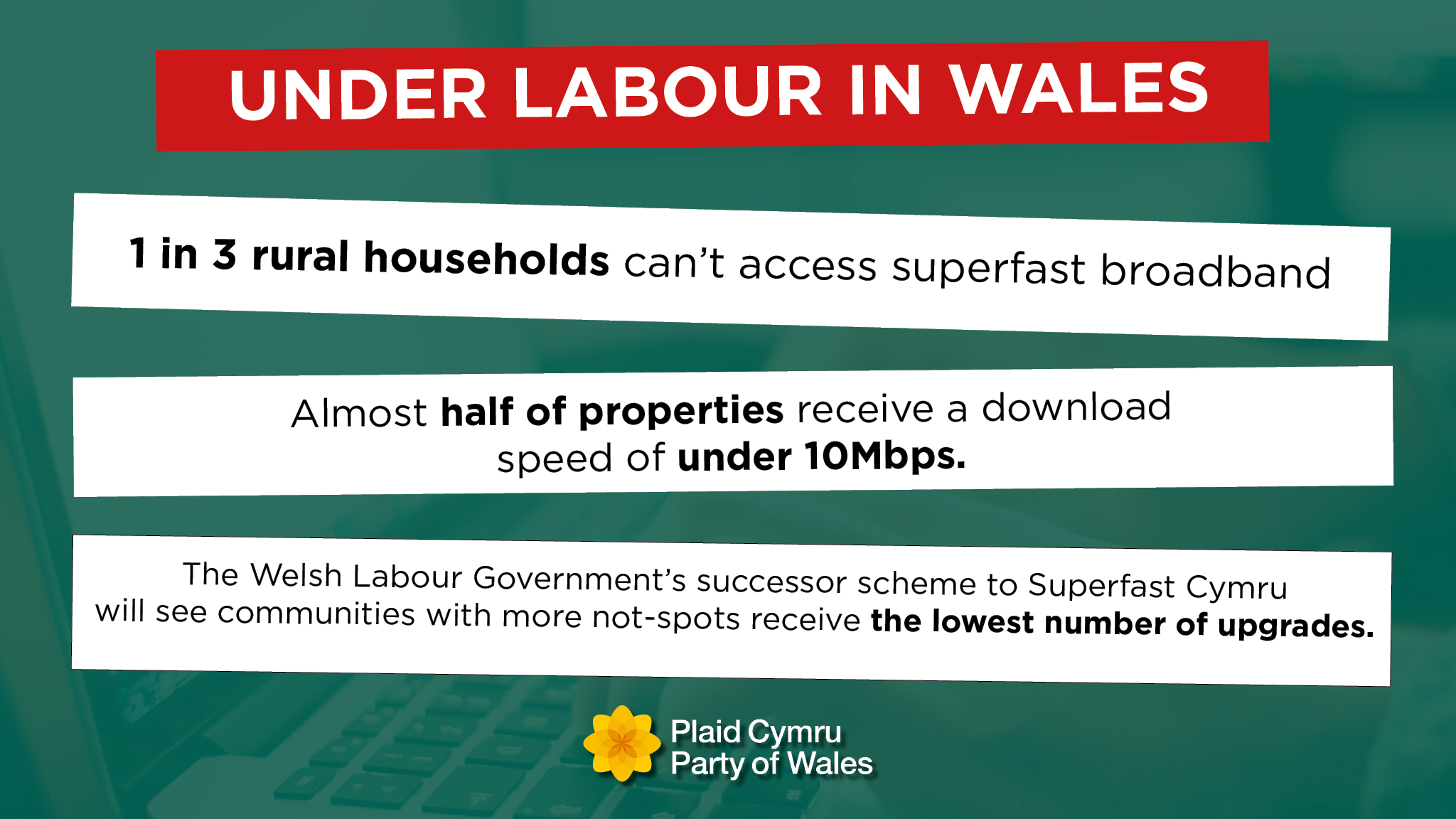 “Labour’s fibre failure shows they can’t be trusted broadband” – that was the message from Plaid Cymru today in response to Jeremy Corbyn promising free broadband to everyone.

Plaid Cymru’s Jonathan Edwards said people in rural Wales have been willing to “give their right arm for the most basic of connections” but have been consistently let down by the Labour Welsh Government.

Mr Edwards, who has served as the MP for Carmarthen East and Dinefwr since 2010, said the communities and economies of rural Wales had been left in the connectivity “slow lane” due to the Labour Welsh Government prioritising “easy-hits” in more urban areas.

In 2016 Plaid Cymru proposed delivering ultra-fast broadband to all Welsh homes by 2025, via exploring the development of a publicly- or mutually-owned broadband network, ISP and telecommunications company similar to Euskaltel, part-owned by the Basque Government to address poor connectivity in Wales.

Plaid Cymru’s Jonathan Edwards said it has taken Jeremy Corbyn three years to “catch up with Plaid Cymru” and even then be “less ambitious.”

“Every year we get the Labour Welsh government telling us how many properties have been upgraded to superfast broadband, but every year we see a report from regulator Ofcom which tells us rural Wales is in the information superhighway slow lane.

"Rural communities have never asked for a handout. We’ve asked for fair play and fair investment in our connectivity.  Instead, close to 1 in 3 rural properties can’t access superfast broadband and almost half of properties receive a download speed of under 10Mbps.

“My constituents have been willing to give their right arm for the most basic of broadband connections, yet it is the Labour Welsh Government which has prioritised the easy hits in more urban areas in an attempt to make their numbers look good.

“To rub salt in the wound, the Labour Government’s successor scheme to Superfast Cymru will see the communities with more not-spots receive the lowest number of upgrades.

“On one of his whistle stop visits to Wales Jeremy Corbyn should take a drive around our rural villages and see the scores of rolled up cables which have been cruelly left unfinished.  He should then ask his Labour colleagues why they are now upgrading even more properties in communities where 99% already get superfast, but swathes of not-spot areas in rural Wales will be largely ignored.

“In 2016 Plaid Cymru announced our ambition to develop a publicly-owned broadband network and deliver ultra-fast broadband to every home in Wales.  It’s not only taken Jeremy Corbyn three years to catch us up, he is being less ambitious.

“It is precisely because of his party’s fibre failure that the people of rural Wales know that Labour can’t be trusted on broadband.”