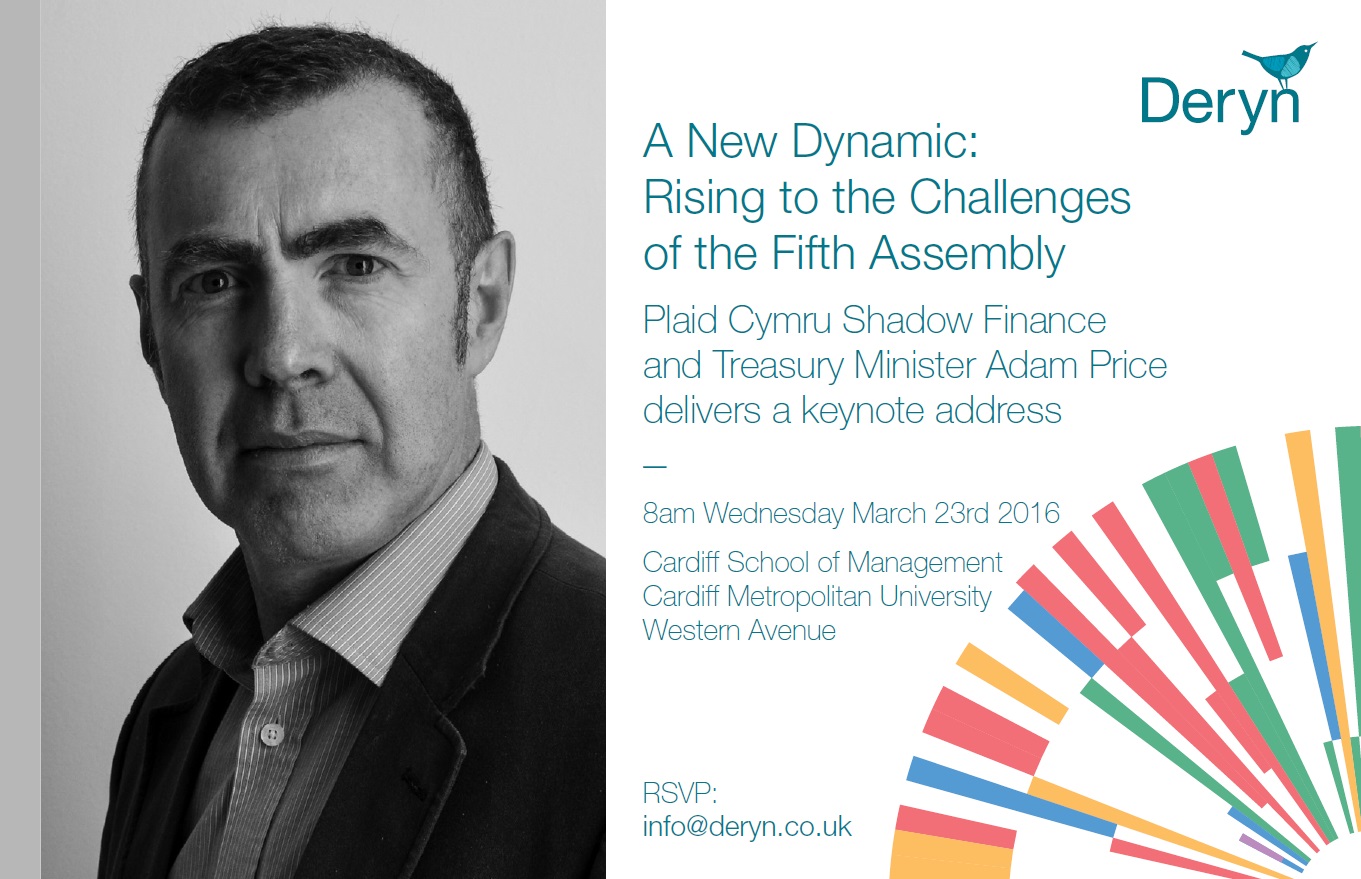 The Welsh Government needs a new dynamic – a culture and a structure more fitted to delivering change, Plaid Cymru’s Adam Price will today say. In a keynote address at Cardiff School of Management, Plaid Cymru Shadow Minister for Treasury and Finance will also set out his party’s plans to introduce a new culture of government characterised by a streamlined civil service primed for change.

He will say that its success will be measured by a “Three by Ten” of success: three objectives for the next decade.

Adam Price will criticise the Welsh Government’s failure to coordinate its work, operating in silos, with a bloated civil service and a culture of inertia and conservatism.

“In Wales, our economy and our education system have declined relatively under devolution, and the most we can say for our health service, despite diverging radically from our near neighbours, is that it is no better and no worse - though waiting times are indeed the worst of all the four nations. Over the last ten years most parts of our country have seen one or other core public service in special measures, a sobering reminder of a system in dire crisis.

“The core problem is that Government in Wales has become good at the wrong things and bad at the right things. Good at avoiding blame when things go wrong, and keeping Ministers out of trouble. Good at defending the status quo. Good at adding management layers and numbers of staff. Bad at basing policies on evidence, at managing resources efficiently, at innovating, reforming and improving service delivery, at being accountable. It’s a long list.

“There has been no shortage of strategies. But there was no strategy, no structure, no theory at the level of the Government as a whole. The theory of change that the Labour government currently operates is to create a statutory duty on someone else to do something and then create a Commissioner or an Ombudsman to report back to the Government on why that is not being done.

“The how of Government is often more important than the what. Or indeed the who. Policies and personalities in Government often founder on something much deeper which is the capacity of the system as a whole to effect change, whatever the change is and whoever the change-maker. We need a new dynamic, a new way of working, across Government and between Government and citizen if we are to get Wales moving.”

Adam Price who is standing for election in Carmarthen East and Dinefwr will go on to say:
“A Plaid Cymru government will simplify the yardstick of success to three key objectives for the next decade, our Three by Ten: slashing the economic gap between Wales and the UK by 10% by 2026 and achieving parity a decade later; saving 10,000 lives by cutting avoidable deaths by 25% by 2026; achieving a top ten place for Wales in Europe in all five PISA rankings within a decade.

“These are ambitious goals which will require radical reform which goes far deeper than the structural change of reorganisation.

“We want Wales to leverage its small country advantage – big enough to scale beyond the local but small enough to be manageable – to become the pre-eminent global test-bed for public service and economic innovation.

“To achieve this we should adopt the small country model of a smart, efficient central state orchestrating a wider system where detailed strategy and delivery is the work of properly empowered executive bodies, with strong professional competence and technical expertise, democratically accountable but with the autonomy and agility needed to improve the quality and speed of decision-making.”

Adam Price will also address the need to put an alternative system in place to drive improvements in delivery so that it can secure better outcomes at lower cost in the face of inevitable budget cuts delivered by the UK Government.