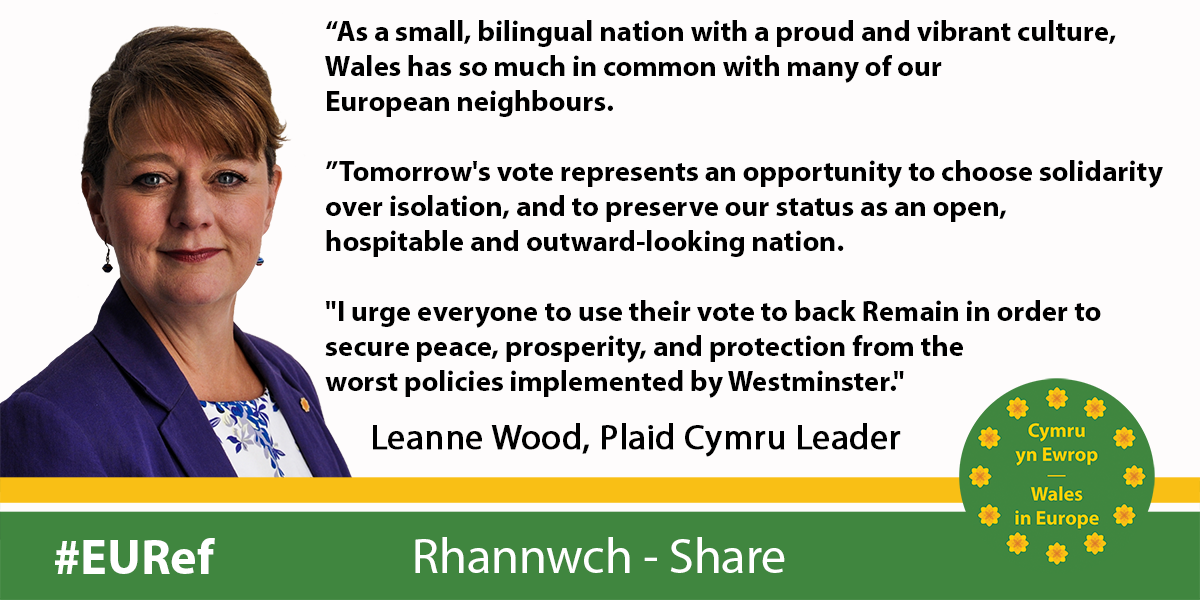 Plaid Cymru Leader Leanne Wood has today urged people in Wales to use their vote in tomorrow's EU referendum to back Remain in order to secure peace, prosperity, and protection from the worst policies implemented by the Westminster elite.

Outlining the economic case for Wales's place in the EU, Leanne Wood pointed to figures which show that 200,000 Welsh jobs - nearly one in seven - are linked to the single market of 500 million people.

She added that the European Union had been wrongly blamed for many of Westminster's actions such as implementing devastating cuts to public services, and that a vote to Leave would put Wales at the mercy of the furthest right-wing of the Tory party in London.

"The result of tomorrow's referendum could prove to be a defining moment for our nation.

"People in Wales face a choice between remaining within a community of nations which benefits our economy, protects workers' rights and enhances our security, and turning our backs on our closest neighbours, allies and trading partners.

"The EU is far from perfect but reform is achieved through securing a strong voice at the table, not shouting from the sidelines. The benefits far outweigh the costs.

"For many decades, the European Union has kept the peace on a continent once blighted by brutal conflict. Not only does the EU offer stability in terms of our security, it also provides vital economic support for some of Wales's poorest communities.

"Crucially, a vote to pull out of the European Union would put our nation at the full mercy of a right-wing Tory elite hellbent on pursuing an agenda of further austerity and privatisation. A victory for Leave would see our country going backwards, not forwards.

"As a small, bilingual nation with a proud and vibrant culture, Wales has so much in common with many of our European neighbours. Tomorrow's vote represents an opportunity to choose solidarity over isolation, and to preserve our status as an open, hospitable and outward-looking nation.

"I urge everyone to use their vote to back Remain in order to secure peace, prosperity, and protection from the worst policies implemented by Westminster."