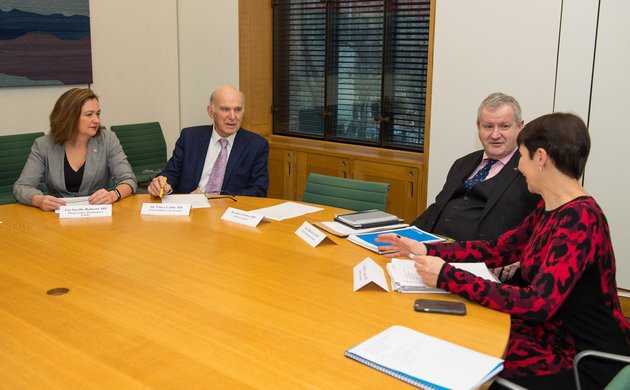 The Westminster leaders of Plaid Cymru, the SNP, the Green Party and the Liberal Democrats are working to build an alliance with the trade union movement, to protect the UK’s vital membership of the Single Market and Customs Union.

The opposition leaders have invited Frances O’Grady to attend the second meeting of the cross-party Single Market summit. In a letter to the Trades Union Congress (TUC) General Secretary, the leaders voiced their agreement with concerns that workers’ rights, jobs, incomes, and living standards are all under threat from the Westminster Government's plans to drag the UK out of the Single Market.

Backing the TUC campaign to protect the Working Time Directive, the leaders warned that Single Market membership is crucial to prevent Westminster watering-down, or scrapping, the hard-won employment rights that millions of people across all UK countries currently enjoy. Rights including paid holidays, lunch and rest breaks, reasonable working hours, parental leave entitlements, health and safety provisions, and discrimination protections, would all be on the line under a hard Brexit.

The opposition leaders believe trade union support is key to building a majority in parliament, and across the UK, for remaining in the Single Market. Last week, a cross-party amendment to the EU Withdrawal Bill won support from Plaid Cymru, SNP, Green, Labour, Tory, Lib Dem and Independent MPs but was ultimately defeated as the Labour leadership abstained.

“Our membership of the Single Market not only provides vital economic links to encourage stronger wages and a higher standard of living, but also crucially ensures workers are treated fairly – are entitled to annual leave, maternity and paternity pay and reasonable working hours.

“Pulling out of this important bloc will put these hard-fought minimum standards in the hands of Tory MPs who are explicitly hostile to workers’ rights. It’s important that the opposition parties work with trade unions to safeguard workers’ rights and the TUC’s involvement would mark an important step in our fight against a hard Brexit.”

“Our single market membership is absolutely crucial to protecting the jobs, incomes, and hard-won rights of millions of people across Scotland and the UK. The Tories are pushing for an extreme Brexit precisely so they can rip up workers’ rights, and turn our country into their right-wing fantasy of a low-regulation tax haven.

“Frances O’Grady is a champion for workers, and the trade union movement has a crucial role to play in building support for the single market in parliament, and across the country. As we hurtle towards the EU exit door, it is incumbent upon all of us who care about the rights we enjoy, and the long-term prosperity of the country, to do everything we can to prevent the devastation a Tory hard Brexit would cause.”

“Leaving the Single Market would be a disaster for workers. Not only are thousands of jobs dependent on it, but it also enshrines workers’ rights across national borders and avoids a race to the bottom. The TUC are a key voice in the fight to stay in the Single Market and have a vital role to play as a part of this struggle.”

“Frances O’Grady is a widely respected figure among all parties and has been staunch in defence of the Single Market and Customs Union. As TUC leader, her words are poignant reminders to the Labour leadership, which continues to let down workers by not joining us in opposing the Conservatives.

“We look forward to welcoming her at the next cross-party meeting.”

The letter to Frances O'Grady is reads as follows:

On Tuesday 9th January 2018, we hosted a cross-party meeting of opposition parties in Parliament to set out a united front in support of the UK’s continued membership of the single market.

We shared our concerns around the current UK government’s approach, which risks a devastating outcome for jobs and business across the UK, and we expressed hope that by working together we can prevent such a disaster.

Our primary concerns are around the threat which leaving the single market poses to jobs, incomes, workers’ rights and the environment. Of course many more problems exist, with a knock-on effect threatening the wider economy.

We have warmly welcomed your comments from the TUC’s annual congress last September in which you set out the tests for a Brexit deal which would protect working people. We all wholeheartedly agree, as you said then, that staying in the single market and customs union would deliver such protection.

There has been much analysis completed, including that of the Fraser of Allander Institute, London School of Economics and from the TUC. We would be delighted if you would be available to join us in late February for our next cross-party meeting to discuss the real threat leaving the single market will have on workers across the UK.