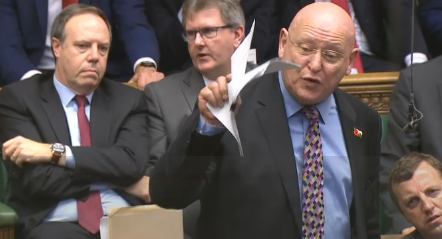 Plaid Cymru’s Westminster group leader, Hywel Williams MP, has criticised the Prime Minister for ‘picking winners’ and finding concessions for London’s financial services sector from the Government’s plans for a ‘hard Brexit’, whilst ignoring the needs of Wales and the other devolved nations.

The Arfon MP used Prime Minister’s Questions to highlight reports that the Prime Minister will drag every UK country out of the single market and customs union, but continue to pay into the EU budget to secure privileged access for certain sectors to avoid ‘the dire consequences’ of leaving the economic union.

Mr Williams asked the Prime Minster if she will consider making similar concessions for Wales – a country whose economy is led by its exports and has a £5 billion trade surplus.

“Wales is an exporting nation – we export around £5 billion more than we import and our economy depends on that trade. Wales voted to leave the European Union and leave we must do but Wales did not vote to leave the single market or the customs union.

“If the Prime Minister can carve out special deals for her friends in the City of London, and it seems for one car plant in Sunderland, then it should be able to carve out the same deal for Wales.

“I am not prepared to stand silent as our First Minister seems to want to do, and allow Westminster to impose a Soft Brexit for bankers and a Hard Brexit for everyone else. I’m here to defend Wales’ interests and it is in Wales’ interests to maintain our membership of the single market and the customs union, once we leave the European Union.”