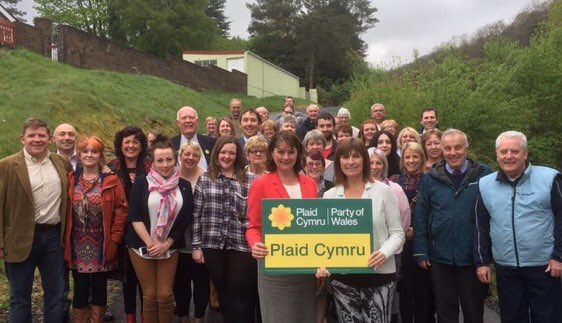 Plaid Cymru has selected local company director and TV producer, Branwen Cennard, as its candidate to fight the UK election in the Rhondda constituency.

Ms Cennard, who will be standing in her home constituency, was selected by her local party on Sunday afternoon.

Branwen was born and raised in Treorci, Rhondda where she lives with her husband, Matthew. She attended Ysgol Gynradd Gymraeg Ynyswen and Ysgol Gyfun Rhydfelen. She graduated in Drama at the University of Wales, Aberystwyth in 1986 and since then has worked in the media sector, mainly as a television producer.

Branwen was responsible for the TV series, 'Iechyd Da’, that was located and filmed in the Rhondda along with a number of films and various drama series for S4C. She has worked for a number of companies, including Tinopolis, Boomerang and the BBC and in 2013 established her own company, Tarian.

Tarian is responsible for producing the political drama series, 'Byw Celwydd' - that succeeded where James Bond failed, by being allowed to film in the chamber of the National Assembly.

Speaking after her selection as Plaid Cymru’s candidate for the Rhondda constituency, Branwen Cennard said:

"As someone born and raised in the Rhondda, the future of this valley, its people and children, is of great concern to me, and seeing the increasing poverty levels, the lack of opportunity, the endless cuts to basic services has spurred me to take action.

“The Rhondda and its people have contributed massively to the wealth of Britain and it is now time to remind the Westminster government of its debt to our communities.

“This unexpected election gives me an opportunity to act and speak up for the Rhondda and Wales.”

AM for the Rhondda and leader of Plaid Cymru, Leanne Wood, said:

“Plaid Cymru members in the Rhondda have selected a superb, high-calibre candidate.

“Branwen Cennard is a successful businesswoman who was born and raised in the Rhondda. She has worked in television and the creative industries and has taken advantage of opportunities to promote both the people and communities of our two wonderful valleys.

“She has a wide range of talents and skills that will be valuable in transforming people’s standard of living in all communities throughout the Rhondda.

“I know that she will make a fantastic MP and a strong voice for the Rhondda. She will defend Wales and our local communities from the worst of what the emboldened Tories, with an increased majority, have to throw at us.

"Our Communities face twin threats at this election. A Tory Party that has little support locally and who will make our lives here much worse and a Labour Party that has failed people in the Rhonda and is incapable of defending us from the threats that we face.

“A vote for Branwen Cennard is a vote for your community and your country on June the 8th.”