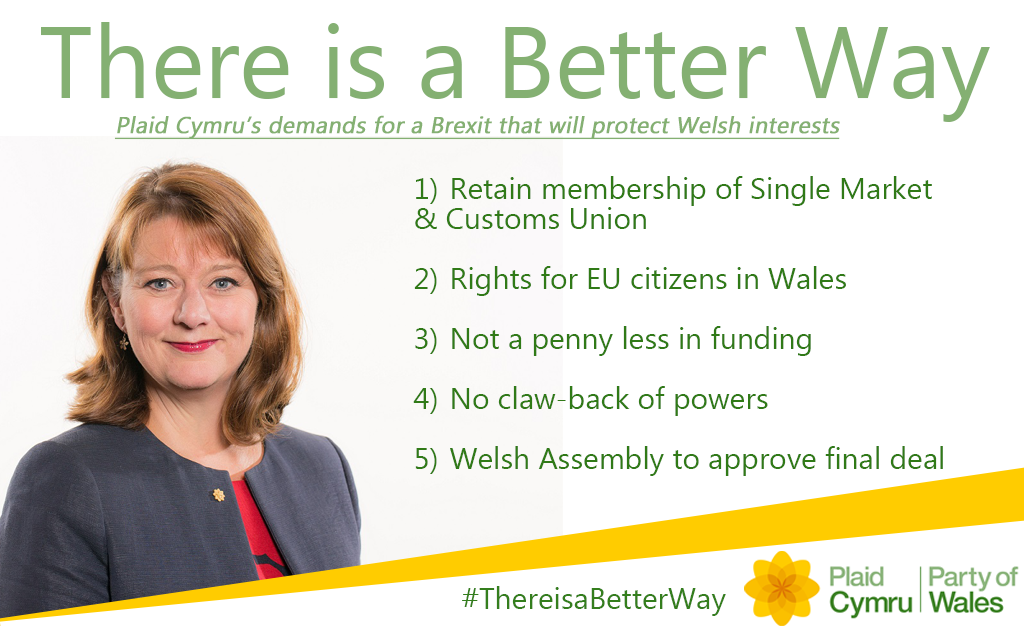 Plaid Cymru leader, Leanne Wood has published her party’s Article 50 letter demands, outlining how defending and advancing the economic interests of each of the four UK members should be the top priority for Theresa May.

Ms Wood’s demands come ahead of the UK Prime Minister’s intention to write to the European Council tomorrow, notifying them of her wish to withdraw all UK members from the European Union.

The Plaid Cymru leader has outlined five key demands she says should be included in Theresa May’s letter, including continued participation within the Single Market and the Customs Union; guaranteed citizenship rights for EU nationals in Wales and Welsh nationals in the EU; continued participation in European funding programmes including a commitment from the UK Government to guarantee current levels of agriculture support payments beyond 2020; a commitment to transfer a package of new responsibilities to the National Assembly for Wales, with no claw back of powers; and a requirement for all devolved administrations to endorse the final terms of the exit deal.

“Since the vote in Wales to leave the European Union, Plaid Cymru has prioritised the Welsh national interest. This has primarily meant defending and advancing our economic interests – jobs and vital trade links, now and in the future.

“Brexit doesn’t have to be as irresponsible, damaging and careless as Westminster intends it to be. It is possible to pursue a sensible Brexit, following in the footsteps of Norway for example, that is not a member of the EU but does participate in the Single Market.

“The UK Prime Minister must remember that her job is to represent all of the UK nations, not just her own. She has a duty to consider the unique needs of Wales as well as the other three UK members so that those who live here can rest assured that their own wages won’t be cut, the cost of living is stable and that their children’s job prospects will be safe.

“Our alternative demands for the Article 50 letter reflect not only what is important to Wales and everyone who lives here, but the promises that were made to voters by the Vote Leave campaign. They offer the UK Prime Minister a list of sensible and moderate options that do not go against the mandate to leave the EU but protect our vital economic links with the continent and reflect the interests of Wales and all who live here.

“The letter that Theresa May sends tomorrow will be the starting point for the next two years of negotiations. It is crucial that we make that starting point as strong as possible, and that we set off on a sensible course and not on a course driven by ideology and electoral tactics.

“We have been told on a number of occasions that the United Kingdom is a partnership of equals. The Article 50 letter will test the Prime Minister's commitment to that assertion and to Wales's economic interests - will she stand up for them or will she walk away?"