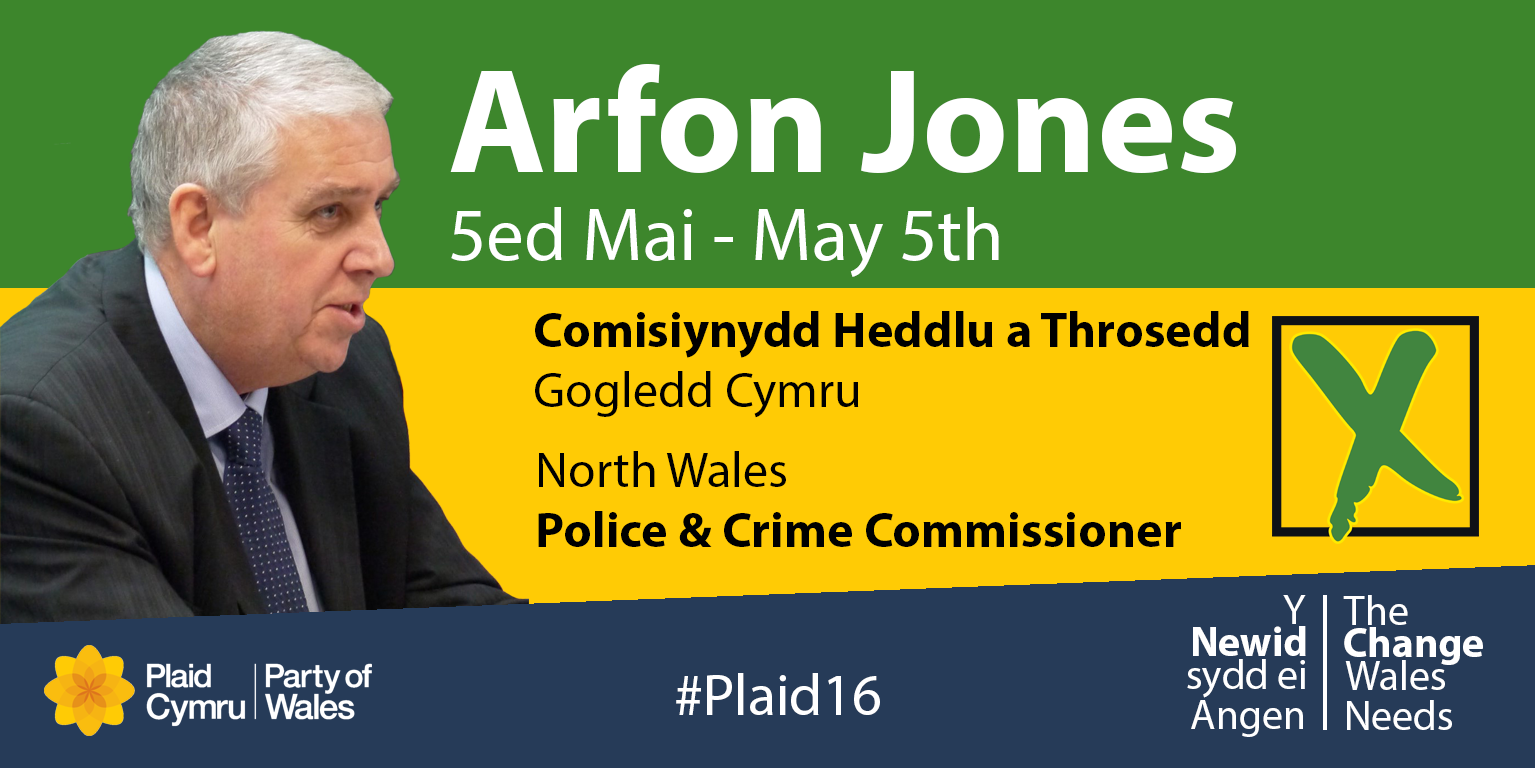 "There is no-one better qualified than Arfon Jones” – that was the message from Plaid Cymru Chair Alun Ffred Jones as he offered his full support to the party’s candidate for Police and Crime Commissioner for North Wales. Alun Ffred Jones said that Arfon Jones has the experience, leadership and sense of justice to work on behalf of people across north Wales.

Arfon Jones said that he was delighted to have received such a glowing endorsement from the party chair and other high profile figures from across north Wales.

“There is no-one better qualified to deliver safer communities for people in north Wales than Plaid Cymru’s Arfon Jones.
“A former police inspector, Arfon understands policing and will work with both police officers and the wider public to deliver for communities.

“Arfon was born in Gwynedd, worked all over the region as a well-respected policeman and now lives and is a councillor in Wrexham. His credentials are beyond reproach and I am pleased to give him my full support.

“North Wales needs a Police Commissioner with an understanding of policing and with the leadership qualities to get the best out of people.”

“I am delighted to have received such heartening endorsements from Plaid Cymru representatives from across the north of Wales. I am standing to be the Police and Crime Commissioner for north Wales because my extensive experience of policing in north Wales means that I understand what does and does not work.

“I want to work with our chief constable to ensure fairer policing in all our communities. I know the importance of early intervention to avoid people entering into the criminal justice system in the first place.”

Other high profile figures from across the north of Wales have endorsed Arfon Jones in his bid to become the area’s PCC:

“Arfon Jones will bring hands-on experience of policing to the role of Police and Crime Commissioner. I know he will represent the citizens of the region with diligence whilst ensuring that the Police are given the support they need.”

“Arfon is ideally suited to understand the challenges of policing the north Wales area. Originally from Meirionnydd, he now lives in Wrexham and worked throughout his professional career as a police officer with North Wales Police. Arfon fully appreciates the issues involved with policing this region, both its rural and urban communities.”

“I am very glad that Arfon is standing as Plaid Cymru's candidate to be the Police Commissioner.

“He is a hard-working and effective councillor who has proved his ability to lead and inspire.

“Also his professional background will be of substantial help to him in representing the people of North Wales and in securing effective an appropriate policing throughout the region.

“It is a pleasure for me to recommend him too you."

“I have known Arfon for years and respect him as a fair and hardworking person. He is an example of a person who does what he promises every time and this can be seen from his work on Wrexham County Borough Council.

“As a former policeman he has invaluable experience for this role. He is an excellent candidate."