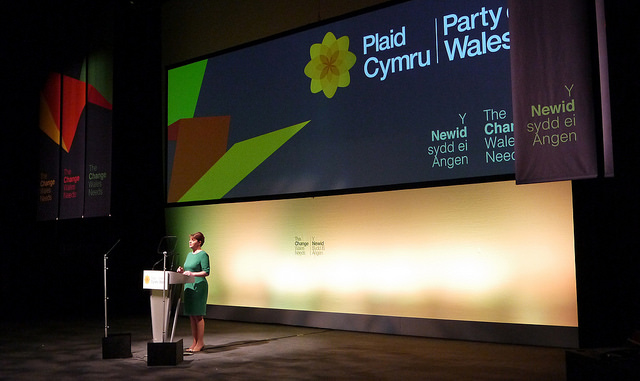 Plaid Cymru Leader Leanne Wood has today used her speech to Spring Conference to spell out the reality of the Labour-Tory "false choice", and said that Plaid Cymru offered a clear alternative to the 'bad or worse' future facing the NHS under either of those two parties.

During her speech, Leanne Wood emphasised that her party's top priority at the Assembly election will be securing the future of the Health Service in Wales.

She added that with clear and costed proposals to cut waiting times, improve cancer care and tackle the staff shortage crisis facing the service in Wales, Plaid Cymru had the best programme of any party to save and strengthen the NHS.

"It suits the Tories and Labour to present May's election as a choice between those two parties and those two alone. That is no choice at all.

"We know where seventeen years of the one party has got us, but people deserve to know what the Tories would do to our country if they ever got the chance.

"In government, they have taken every opportunity to suppress the growth of our nation, and its institutions.

"But the greatest danger they pose, without doubt, is to our national health service. Wales cannot afford for the Welsh NHS to have its strings pulled by Jeremy Hunt in Whitehall through a Tory Welsh health minister.

"The long-term implications of that spell disaster. I don't want to see junior doctors badly treated here as they have been in England. We cannot afford to allow the Tories to privatise the Welsh NHS through the back-door as they are doing in England.

"When it comes to the Welsh NHS let people be in no doubt: while Labour run it down, the Tories want to sell it off.

"Plaid Cymru's first priority is the nation's health. Our ambition is to see a Wales that's well, with a free, universal health service run for people, not for profit, kept in public hands for the public good.

"Plaid Cymru's cancer contract will prevent cancer, support those with a diagnosis, end the postcode lottery for new drugs and treatments and will cut diagnostic waiting times so that no one has to wait longer than 28 days for a diagnosis or the all-clear.

"We will invest in the health workforce - and we will bring down waiting times by training and recruiting a thousand extra doctors and five thousand extra nurses.

"Plaid Cymru will end the artificial divide between health and social care and provide free care for older people, starting with abolishing charges for home care and for people with dementia within the next five years.

"Our treasured Health Service does not have to face a future between bad or worse with Labour or the Tories. Plaid Cymru offers the real alternative required to save and strengthen our NHS."