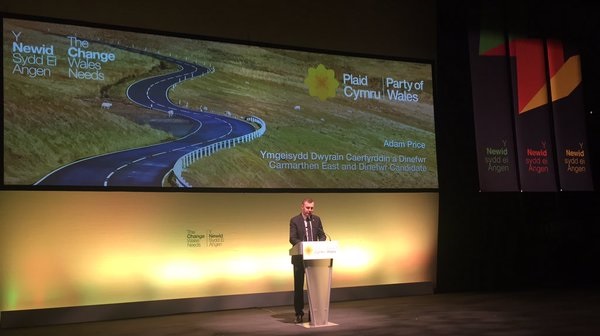 Former Member of Parliament and candidate for the National Assembly election, Adam Price, has given a rousing speech to the party faithful at Plaid Cymru's national conference in Llanelli this weekend.

Adam Price, who is the architect of Plaid Cymru's manifesto for May's Welsh election, concentrated on two key themes - a critique of the 19 year record of the Labour party running Wales and a pioneering vision for the nation.

The Carmarthen East and Dinefwr representative told delegates that Plaid Cymru would establish a National Innovation Body to create that future economy, a new-model development agency to sell Wales across the world, a Bank of Wales to back our businesses, an Infrastructure Commission to lay the foundations of our prosperity not just in one corner of our country, but throughout the land."

"Let no-one say that Wales cannot be a land of opportunity", he said.

Having started his conference speech with historical references, Adam Price went on to say:

"This year of 2016 is different. This year, the challenge is not to remember but to be history, to make history, to shape history. The challenge for us is not to be passive bystanders at our own funeral but the active agents of our own regeneration. For the next nine weeks the levers of our future lie in our own hands.

"It's nine weeks out and not a vote has been cast but I think we can confidently make one prediction. Labour will lose in May. And they deserve to lose because they have already lost any sense of direction, any scrap of creativity, of vision, of drive. They have put us at the bottom of the league for prosperity, for wages, for literacy, for numeracy and science.

"We have the highest economic inactivity rate of any part of the United Kingdom.

"Carwyn Jones says, of course, that he is only half way through his decade of delivery. And that's true enough. The problem is the decade's the 1970s. We are going backwards not forwards as a nation.

"We are a talented country. Let no-one doubt what Wales can achieve. It's not just our own history but our future and our fortune too that we can make here in Wales."