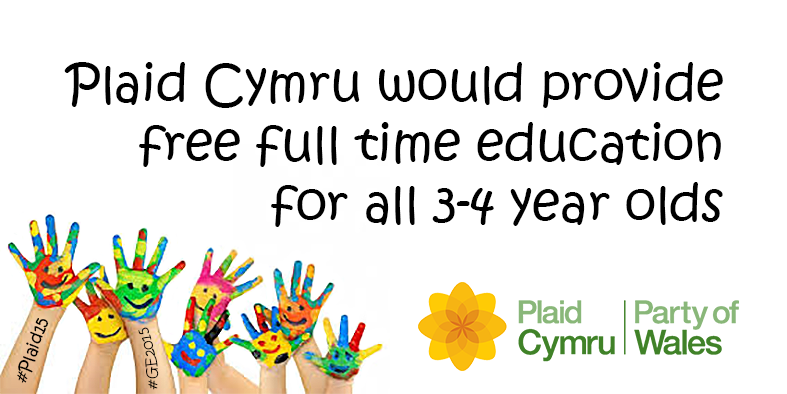 A Party of Wales government would deliver free high-quality childcare to all children from the age of three, the Party’s Shadow Education Minister Simon Thomas has said.

The radical proposals will help close the attainment gap between children from poorer backgrounds, and will help parents return to work or work longer hours.

Parents in Wales currently pay among the highest costs for childcare in the developed world, and childcare costs have risen by 40% in Wales since 2011 – far more than the UK average increase of 32.8%.

Simon Thomas said that his party’s proposals could save parents more than £100 per week.

A Plaid Cymru government would invest an additional £100m over ten years to deliver the policy.

Shadow Education and Skills Minister for Plaid Cymru Simon Thomas speaking at the launch of the policy at a nursery in Carmarthen said:

“Plaid Cymru will support parents who work and give children the best start in life by lowering the school starting age to three. Research shows that done properly, a good childcare system helps tackle the link between poverty and poor attainment, helps improve the economy, and helps take families out of poverty. That’s why Plaid Cymru’s plans are important – this isn’t just about improving children’s educational output, but is about strengthening the economy, giving parents greater flexibility over work, and about putting money back in parents’ pockets.

“Families in Wales have a rougher deal than elsewhere in the UK. Childcare is more expensive here than the UK average, there is less available childcare in Wales than in England, and parents in Wales are entitled to less free childcare than other UK nations.

“Many parents are not able to work as much as they want to because of childcare constraints, so it’s important we give parents the opportunity to work more. Good quality childcare along with early-years education can provide children with a good start in life helping them develop their cognitive skills as well as social benefits.

Plaid Cymru will introduce the policy in two stages.

In the short-term, three year olds would be entitled to 15 hours a week of early education, attending class for full mornings rather than for 2 hours a day.

In the long-term, full-time early education of 30 hours a week would be provided. Existing providers of early education for children such as the voluntary sector could provide this service as well as schools.

The additional year of early education would be optional for parents.