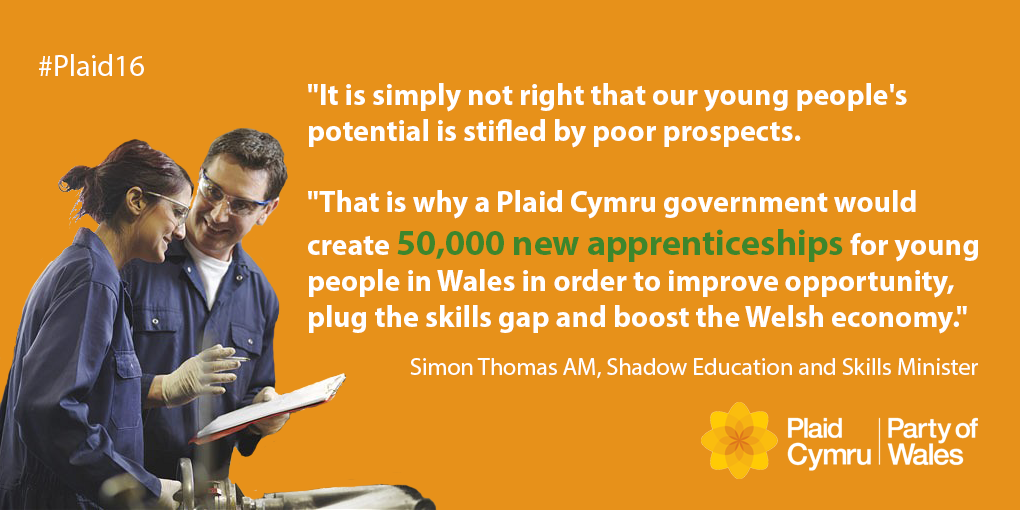 Plaid Cymru's Shadow Education Minister, Simon Thomas AM, has today unveiled his party's plans for a landmark investment in 50,000 apprenticeships in Wales over the next five years.

Speaking ahead of the launch at the British Gas Training Academy in Tredegar, Simon Thomas AM said that a Plaid Cymru government would use Wales' share of the apprenticeship levy to create these additional roles over the next Assembly term.

The levy is set to bring in around £150m to Wales each year as a result of increased spending in England, announced in November's Spending Review.

He added that Plaid Cymru was committed to working towards ensuring that no young person in Wales is not in education, employment and training while between the age of 16 and 24, in order to improve prospects for the next generation.

"Plaid Cymru is committed to investing in our young people's future and ensuring opportunity for all. We are eager to build on our work of securing 5,500 apprenticeships as part of the 2012 Welsh budget.

"At present, 12,200 young people between 16-18 years old are not in education, employment or training in Wales. They represent one in 10 young people within that age bracket.

"That is why a Plaid Cymru government would use Wales' share of the apprenticeship levy to invest in 50,000 places over the next Assembly term.

"We believe that apprenticeships offer an equally valuable route into employment as university degrees, and we are committed to securing parity of esteem between these two paths.

"Apprenticeships are also an excellent economic investment. According to the National Training Federation Wales (NTFW), they provide a £74 return for every £1 invested.

"Plaid Cymru recognises that creating meaningful opportunities is vital for the Welsh workforce's wellbeing and the nation's wealth.

"This landmark investment in young people's future would help boost prospects for the next generation, plug the skills gap in many vital sectors such as engineering and ICT, and improve the general health of the Welsh economy."